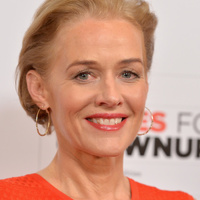 Penelope Ann Miller net worth: Penelope Ann Miller is an American actress who has a net worth of $4 million dollars. Penelope Ann Miller was born in Los Angeles, California, and grew up in a family of actors and artists. After graduating from high school, she moved to the East Coast to study theater. She began appearing in Broadway productions in the mid-80s, starring opposite Matthew Broderick in the hit show, "Biloxi Blues" in 1985. She made her film debut two years later in "Adventures in Babysitting", and then went on to appear in the film version of "Biloxi Blues", as well as in "Big Top Pee Wee". She received a Tony nomination for her work in "Our Town" the same year. Since then, she has appeared in such film projects as, "Awakenings", "Kindergarten Cop", "The Gun in Betty Lou's Handbag", "Along Came a Spider", "Blond Ambition", and "Saving Lincoln", in addition to a wide range of television roles. She has also been nominated a Golden Globe, among other awards.