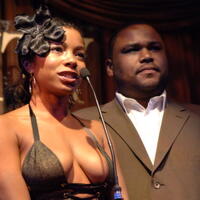 Paula Jai Parker net worth: Paula Jai Parker is an American actress and comedian who has a net worth of $150 thousand dollars. Paula Jai Parker was born in Cleveland, Ohio in August 1969. Parker graduated from Howard University and then moved to New York City and performed at clubs. As an actress Parker appeared in the TV series Townsend Television in 1993. In 1995 she starred as Joi in the movie Friday. Paula starred as Monique in the television series The Wayans Bros. from 1995 to 1996. She also had a recurring role on The Weird Al Show in 1997. She starred in the TV series Snoops as Roberta Young from 1999 to 2000. From 2001 to 2005 Parker voiced the role of Trudy Proud in the animated television series The Proud Family. In 2007 she starred as Stargell Grant in the TV series Side Order of Life. She starred as Lori in the series Family Time in 2012 and has had a recurring role as Karen in the series True Blood since 2013. She has also starred in the movies Tales from the Hood, Get on the Bus, Don't Be a Menace to South Central While Drinking Your Juice in the Hood, Sprung, Woo, Why Do Fools Fall in Love, The Breaks, High Crimes, Love Chronicles, Phone Booth, 30 Years to Life, Playas Ball, My Baby's Daddy, She Hate Me, Animal, Hustle & Flow, Idlewild, The Genius Club, and Cover. Parker won a CableACE Award in 1995 for Actress in a Dramatic Series. Parker is one of the featured cast members in the new TV One reality TV series Hollywood Divas which premiered in October 2014.