What is Patricia Arquette's Net Worth and Salary?

Patricia Arquette is an American actress and director who has a net worth of $24 million dollars. Arquette made her major film debut in 1987's "A Nightmare on Elm Street 3: Dream Warriors," and she has appeared in more than 60 film and television projects since her battle with Freddy Krueger, such as "True Romance" (1993), "Lost Highway" (1997), and "Bringing Out the Dead" (1999). Patricia portrayed real-life psychic Allison Dubois on the NBC/CBS series "Medium" from 2005 to 2011 and played Deputy Director Avery Ryan on the CBS crime drama "CSI: Cyber" from 2015 to 2016. Arquette also starred as Olivia Evans in the film "Boyhood" (2014), which earned her several awards, including an Oscar.

Patricia Arquette was born on April 8, 1968, in Chicago, Illinois. Her mother, Brenda, was a therapist, and her father, Lewis, was an actor. Patricia and her siblings, Rosanna, David, Alexis, and Richmond (who all went into acting), grew up with an abusive mother and alcoholic father; sadly, Alexis, who had lived with HIV for nearly three decades, died of a heart attack brought on by a bacterial infection in 2016. The Arquette family spent some time living on a commune in Bentonville, Virginia, then moved to Chicago when Patricia was 7 years old. The family later relocated to Los Angeles. Arquette, who attended Catholic school, wanted to be a nun as a teenager, and at age 14, she ran away from home and lived with Rosanna after discovering that their father had been unfaithful to their mother.

In 1987, Patricia appeared in the films "A Nightmare on Elm Street 3: Dream Warriors" and "Pretty Smart" as well as the TV movie "Daddy." She soon appeared in the films "Time Out" (1988), "Far North" (1988), and "Uncle Buck" (1989) and the made-for-television movie "The Edge" (1989). Arquette guest-starred on "Thirtysomething," "The Outsiders," and "Tales from the Crypt" in 1990 and starred in the Sean Penn-directed "The Indian Runner" in 1991. In 1992, she co-starred with Reese Witherspoon in "Wildflower," which was directed by Diane Keaton, and earned a CableACE Award for Best Lead Actress in a Mini-Series. Patricia received critical acclaim for her performance in 1993's "True Romance," and in 1994, she appeared in the films "Holy Matrimony" and "Ed Wood" and the TV movie "Betrayed by Love." She co-starred with Ben Stiller and Téa Leoni in 1996's "Flirting with Disaster" and played an atheist suffering from stigmata in the 1999 supernatural horror movie "Stigmata."

Arquette played Adam Sandler's love interest in "Little Nicky" (2000) and lent her voice to the animated film "Lady and the Tramp II: Scamp's Adventure" (2001). In 2003, she portrayed adult film star Linda Lovelace in "Deeper than Deep" and played Kissin' Kate Barlow in Disney's "Holes." In 2005, Patricia began starring as Allison DuBois on "Medium," appearing in 130 episodes over seven seasons and directing the episodes "A Person of Interest" and "The First Bite is the Deepest." After "Medium" ended in 2011, Arquette appeared in the films "Girl in Progress" (2012), "A Glimpse Inside the Mind of Charles Swan III" (2012), "Vijay and I" (2013), and "Electric Slide" (2013) and began a 10-episode stint on HBO's "Boardwalk Empire." In 2014, she earned rave reviews for her performance in Richard Linklater's "Boyhood," which was filmed over a period of 12 years. That year, she also guest-starred on "CSI: Crime Scene Investigation" as Avery Ryan and went on to play the role in all 31 episodes of "CSI: Cyber." In 2018, Patricia played Joyce "Tilly" Mitchell on the Showtime limited series "Escape at Dannemora," and she followed her award-winning performance with Hulu's "The Act," which earned her an Emmy. In 2019, she voiced Harmony's Mom in "Toy Story 4," which grossed $1.073 billion at the box office, and she produced and starred in "Otherhood." Arquette appeared in the 2020 documentary "You Cannot Kill David Arquette," and she is set to star in the Apple TV+ series "Severance."

When Patricia was 20, she had a son, Enzo (born January 3, 1989), with musician Paul Rossi. Arquette married actor Nicolas Cage on April 8, 1995, and they divorced in May 2001. She became engaged to actor Thomas Jane in 2002, and they welcomed daughter Harlow on February 20, 2003. Patricia and Thomas wed on June 25, 2006, in Venice, Italy, and they divorced in 2011. Arquette's mother passed away from breast cancer in 1997, and Patricia has participated in the Race for the Cure in her honor. In 1999, she served as the spokesperson for Lee National Denim Day, a fundraiser for breast cancer research. Arquette co-founded the nonprofit organization GiveLove after the 2010 Haiti earthquake and helped build shelters in the country. Patricia has also supported The Heart Truth, Eracism Foundation, The Art of Elysium, and the Libby Ross Foundation.

In 2015, Arquette won an Academy Award for Best Performance by an Actress in a Supporting Role for "Boyhood," and her performance also earned her a Golden Globe, Screen Actors Guild Award, BAFTA Award, AACTA International Award, Film Independent Spirit Award, Gold Derby Award, Online Film & Television Association, and Satellite Award as well as awards from several film critic associations. Patricia received two Primetime Emmy nominations and three Golden Globe nominations for "Medium," and she won the Emmy for Outstanding Lead Actress in a Drama Series in 2005. She also won an Emmy for "The Act" in 2019, and she has won Golden Globes for "The Act" and "Escape at Dannemora." The GLAAD Media Awards honored Arquette with a Vanguard Award in 2017, and she received the American Riviera Award at the 2015 Santa Barbara International Film Festival. "Escape at Dannemora" earned Patricia a Gracie Allen Award, Golden Nymph award (Monte-Carlo TV Festival), and Screen Actors Guild Award. 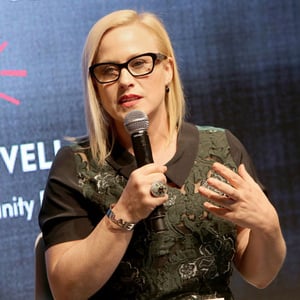