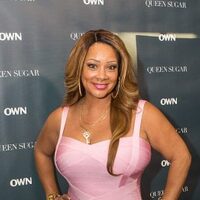 Patrice Lovely Net Worth: Patrice Lovely is an American actress who has a net worth of $2 million dollars. Patrice Lovely began her professional acting career in the late 90s, but did not begin to take off until 2004. That year, she joined the UniverSoul Circus, a single ring circus that has had multiple tours around the world. She served as a ringmaster with the show for a number of years. In 2011, she began her career onstage, after she was cast as Miss Hattie in "A Madea Christmas". She went on to appear in multiple Tyler Perry productions, including "Madea Gets a Job", "I Don't Want To Do Wrong!", and "The Haves and the Have Nots". She also appeared in the direct-to-video projects, "Je'Caryous Johnson's Marriage Material" in 2013 and "Hell Hath No Fury Like A Woman Scorned" in 2014. In 2013, she joined the cast of "Love Thy Neighbor" on OWN: Oprah Winfrey Network, reprising her role as Hattie Mae Love.