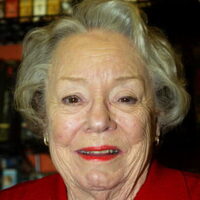 Pat Hitchcock net worth: Pat Hitchcock is an English actress and producer who has a net worth of $150 million. Patricia Hitchcock was born in London, England, UK in July 1928. She is the only child of Alfred Hitchcock and Alma Reville. She was featured on the television series Alfred Hitchcock Presents from 1955 to 1960. Hitchcock starred in the films Stage Fright, The Mudlark, Strangers on a Train, The Ten Commandments, Psycho, and Skateboard. She also appeared in episodes of the TV series Suspense, My Little Margie, Front Row Center, Screen Directors Playhouse, Matinee Theatre, The Life of Riley, Playhouse 90, and Suspicion. Hitchcock was the executive producer for the 2000 documentary The Man on Lincoln's Nose. She authored the book Alma Hitchcock: The Woman Behind the Man in 2003. At the time of his death, Alfred was worth the inflation-adjusted equivalent of $200 million. Alfred's largest payday came from the film Psycho. He deferred his salary in exchange for 60% of the movie's profits. This resulted in an estimated $15 million payday, which adjusted for inflation is around $120 million today.