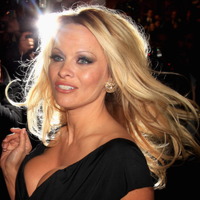 What is Pamela Anderson's net worth?

Pamela Anderson is a Canadian-American actress, glamour model, producer, author, animal rights activist, and former showgirl. Pamela Anderson has a net worth of $20 million. Over the years she has become more famous for her life off-screen, but she first became internationally known after appearing on the series "Baywatch" and her marriage to Motley Crüe drummer Tommy Lee.

Pamela Anderson's rise to international fame began rather accidentally.  While attending a BC Lions Canadian Football League game in Vancouver, Canada where she was living and working, she was shown on the stadium's big screen.  She was wearing a very formfitting Labatt's beer t-shirt and the crowd went wild.  She was then brought down on to the field to massive applause.  That one moment led to her first appearance on the cover of Playboy, and she has enjoyed a very long and successful association with the magazine.

She has appeared on more covers than any other Playboy model, and been featured in the magazine over the course of four decades.  After relocating to Los Angeles, she began a relatively successful acting career as well, further expanding her audience.  She has played recurring or starring roles on such shows as "Home Improvement", "Baywatch", "The Nanny", and "V.I.P.", and has appeared in such films as "Raw Justice" and "Barb Wire".  She also appeared on a short-lived reality series about her life called, "Pam: Girl on the Loose" on E!.  She also competed on "VIP Brother", the Bulgarian spin-off of the "Big Brother" franchise, "Dancing with the Stars", and "Dancing on Ice". 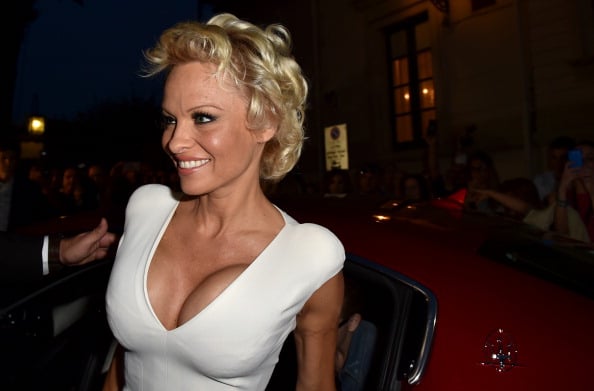 Pamela Denise Anderson was born on July 1, 1967, in Ladysmith, British Columbia, Canada, which is on Vancouver Island. She was born on the 100th anniversary of Canada's official founding and received some attention when she was born as a result of being a "Centennial Baby." Her father Barry is a furnace repairman and her mom Carol is a waitress. As a child, Anderson was sexually abused by a female babysitter from the age of six to the age of 10. She was raped at 12 by a 25-year-old man, and when she was 14, her then-boyfriend and six of his friend gang-raped her.

Anderson played volleyball in high school and graduated in 1985. She made the short move to Vancouver in 1998 to work as a fitness instructor while pursuing a modeling career. Her first paid modeling gig was for Labatt Beer, a Canadian company, in 1989. Around this time, Anderson also started putting out feelers about becoming a Playboy Playmate, which, of course, was what jumpstarted her fame and her career.

Pamela Anderson was on the cover of the October 1989 issue of Playboy. She was then chosen as Playmate of the Month in February 1990 and appeared in that issue's centerfold layout. As of this writing, Anderson has appeared on more Playboy covers than anyone else and her career with the magazine spans three decades.

In the early 1990s, Anderson landed a number of guest-starring roles on sitcoms. Then, from 1991 to 1993, she played Lisa, the Tool Time Girl, on "Home Improvement." However, it was her role as Los Angeles lifeguard C.J. Parker on "Baywatch," which started in 1992, which made her not just a star, but a household name. "Baywatch" was on the air from 1992 until 1997 with 76 episodes total. Anderson starred in the movie "Barb Wire" in 1996 in the title role. She won a Razzie Award for Worst New Star for her work on "Barb Wire." She hosted "Saturday Night Live" in April 1997.

She starred on the TV series "V.I.P." from 1998 to 2002. From 2005 to 2006 she appeared in the series "Stacked." In 2006, she also appeared in Sacha Baron Cohen's mockumentary "Borat: Cultural Learnings of America for Make Benefit Glorious Nation of Kazakhstan." In the movie, she appears as herself at a book signing near the end of the movie. Borat showed up to her book signing and tried to abduct her.

Anderson also spent time on various "Dancing with the Stars" franchises starting with the 10th season of the American version in 2010. Paired with Damian Whitewood, they were eliminated after seven weeks. From there Anderson appeared on the All-Star edition in 2012 and was cut in the first week. She also appeared on the Argentinian and French versions of the show as well as on the U.K.'s "Dancing on Ice." 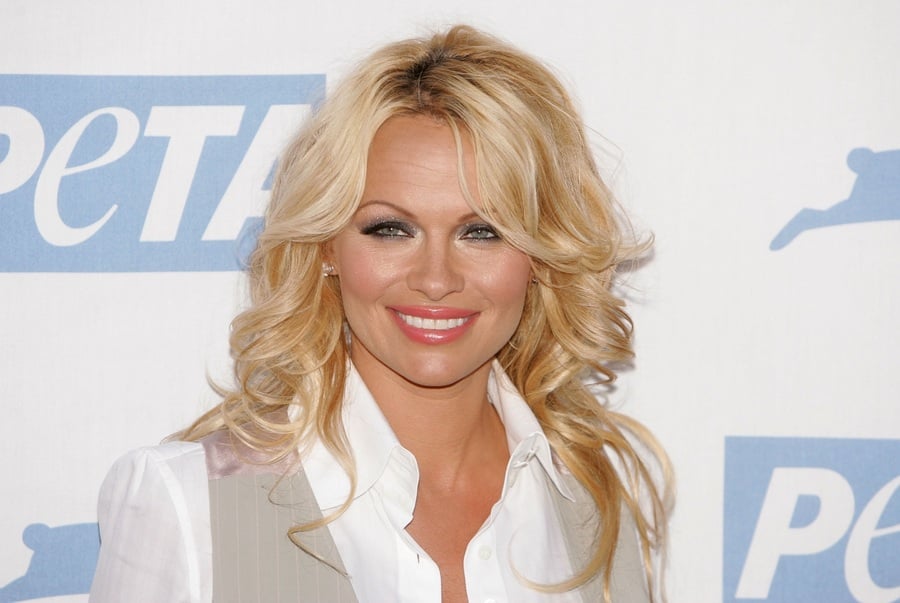 Anderson married Tommy Lee, drummer of Motley Crue, on February 19, 1995, after knowing him for about four days. Anderson's mom learned of her daughter's marriage from People magazine. She was known professionally as Pamela Anderson Lee during her marriage to Tommy. They have two sons together: Brandon Thomas (born June 5, 1996) and Dylan Jagger (born December 29, 1997). During their tumultuous marriage, Lee was arrested after assaulting Anderson. He was sentenced to six months in the Los Angeles County Jail for spousal abuse. The couple divorced in 1998.

After divorcing Tommy Lee, Anderson became engaged to model Marcus Schenkenberg. They broke up in 2001.

Anderson then got engaged to Kid Rock. They broke up in 2003 and then married on a yacht near Saint-Tropez, France in late July 2006. In late November of the same year, she filed for divorce from Kid Rock.

In February 2007, Anderson admitted that she and her ex Tommy Lee still had sex fairly frequently, even after their divorce. In June 2008, Lee said that he and Anderson were trying to make things work together.

On October 6, 2007, Anderson married film producer Rick Salomon. The couple separated two months later, and on February 22, 2008, Anderson requested through the courts that the marriage be annulled. In early 2014, Anderson revealed that she had remarried Salomon. Anderson filed for divorce from Salomon again a year later.

She was involved with WikiLeaks founder Julian Assange.

Anderson began dating French soccer player Adil Rami in 2017. In late June 2019, Anderson took to her Instagram account to post that she and Rami had broken up. In the summer of 2020, one of Rami's former teammates revealed Rami and Anderson had sex 12 times in a night.

During her marriage to Tommy Lee, she made a sex tape that is now infamous in pop culture.

She actively supports PETA (People for the Ethical Treatment of Animals) and is a vegetarian.

In the wake of their break up, after just 12 days, Jon Peters implied in an interview that part of the reason their relationship ended was that Pam was strapped for cash. He further claimed that he had to clear $200,000 worth of debt for Pam. She has had a handful of financial whoopsies over the years. In 2009 Pam appeared on the state of California's list of Top 500 Delinquent Tax Payers when she had a $1.7 million lien filed for unpaid taxes. In 2012 Pam was slapped with two tax liens for unpaid taxes for the year 2011. The IRS claimed that Pam owed $260,000 and the state of California claimed that Pam owed $112,000.

In 2000, Pamela paid $1.8 million for a home in Malibu. She tore down the previous home and proceeded to spend $8 million on a new modern structure. Pamela Anderson's Malibu house features an open-plan living room, a state-of-the-art kitchen, a private movie theater, and a sauna.  Outside there is a roof-top sun deck, a small courtyard with an olive grove, a stone gate out front. She listed the home for sale in March 2013 for $7.75 million. After not finding a buyer, she listed the house for rent for as much as $50,000 per month in the high season. On March 4, 2021 she listed this home for sale for $14.9 million. She had a long-term renter who had been paying $40,000 per month. In August 2021 she sold the home for $11.8 million.

Here's a video tour from when the property was previously listed for sale:

She previously owned a different home in Malibu that was right on the sand. Unfortunately she came home one day and found a female fan who walked right off the sand into her bedroom. When Pamela came home, she found the woman in her bedroom wearing one of her signature Baywatch swimsuits that was pulled from the closet.

Outside of Los Angeles she has owned a six-acre waterfront property on Vancouver Island in Canada for several decades. She actually bought the property from her grandmother who ran a general store there for many years. Her mother and father lived out of a cabin on the property before Pam was conceived. Her parents later married on the property. In recent years Pam has performed some major upgrades on the property's structures, spending a reported $1 million. In November 2020 she transformed one of the barns into an animal sanctuary.

Pamela is one of the most famous and vocal celebrity animal rights advocates. She has long been a practicing vegan. In the late 1990s she stripped down for a PETA advertisement and served on the board of PETA. She chaired the board of directors of The International Sea Shepherd Conservation Society and has even testified on Capital Hill about animal welfare.

For nearly three decades she has operated the Pamela Anderson Foundation whose mission is to "stand on the front lines in the protection of human, animal and environmental rights." The foundation has been awarded a Sam Simon Award, Linda McCartney Award and a Spirit Award. Pam has stated that after she pays for her basic needs in life, all extra income goes to the foundation.