Pam Grier net worth and salary: Pam Grier is an American actress who has a net worth of $4 million. Grier got her break in the early 1970s after starring in a string of moderately successful women in prison and blaxploitation films like "The Big Bird Cage", "Coffy", "Foxy Brown", and "Sheba Baby". In 1997 she made a comeback in the Quentin Tarantino film "Jackie Brown", for which she received a Golden Globe nomination for Best Actress. Grier portrayed Kate "Kit" Porter on the television series "The L Word" for six seasons. Tarantino has said that Pam Grier may have been cinema's first ever female action star.

Early Life and Education: Pam Grier was born in 1949 in Winston-Salem, North Carolina to Gwendolyn, a nurse and homemaker, and Clarence, a United States Air Force technical sergeant and mechanic. She has one brother and one sister, and is of mixed African-American, Chinese, Hispanic, Filipino, and Cheyenne heritage. Due to Grier's father's career in the military, the family often moved to various places in England; they eventually settled in Denver, Colorado, where Grier went to East High School. In Denver, she appeared in many stage productions, and participated in beauty contests to raise money for her tuition at Metropolitan State College.

1970s and Blaxploitation Films: In 1967, Grier moved to Los Angeles, and was hired by American International Pictures as a switchboard operator. She was eventually discovered by director Jack Hill, who cast her in the starring role of his women-in-prison film "The Big Doll House," and subsequently in its follow-up "The Big Bird Cage." In the early 70s, Grier also starred in "Women in Cages," "The Twilight People," "Cool Breeze," and "Hit Man." At this time, while still under contract at American International Pictures, Grier started to become a staple of blaxploitation movies, in which she played bold, no-nonsense women. After starring in "Black Mama White Mama" in 1973, she had her breakout role as the title character of Jack Hill's "Coffy," playing a nurse out for revenge against a drug dealer. As Coffy, Grier is considered to be the first African-American woman to headline an action film.

Success in the 70s continued for Grier in the blaxploitation films "Scream Blacula Scream," "Foxy Brown," "Sheba, Baby," and "Bucktown." She was also in the gladiator exploitation film "The Arena." In December of 1975, Grier starred in her final film with American International Pictures, "Friday Foster." Costarring Eartha Kitt, Scatman Crothers, Carl Weathers, and Yaphet Kotto, the film was based on the syndicated newspaper comic of the same name. Subsequent credits in the 70s included "Drum," the Italian romance film "Twilight of Love," and the biopic "Greased Lightning," starring Richard Pryor as NASCAR driver Wendell Scott.

Film Career in the 80s and 90s: Following the demise of the blaxploitation subgenre, Grier began appearing in other kinds of action and crime films. In 1981, she played a druggie prostitute in "Fort Apache, The Bronx," starring Paul Newman. She followed this with a role as a witch in the horror film "Something Wicked This Way Comes," adapted from the Ray Bradbury novel. Other credits in the 80s include the sports drama "Tough Enough," with Dennis Quaid and Warren Oates; the science-fiction film "The Vindicator," a retelling of the "Frankenstein" story; the drama "On the Edge"; the comedy "The Allnighter"; the Steven Seagal action thriller "Above the Law"; and the political thriller "The Package," starring Gene Hackman.

In the early 90s, Grier appeared in films such as "Class of 1999," "Bill & Ted's Bogus Journey," and the black revisionist Western "Posse," directed by Mario Van Peebles. In 1996, Grier was in three films: the action films "Original Gangstas" and "Escape from L.A.," and Tim Burton's science-fiction comedy "Mars Attacks!" After appearing in the comedy "Fakin' da Funk" in 1997, Grier had her most acclaimed film role ever in Quentin Tarantino's "Jackie Brown," from the same year. The film, which paid homage to the blaxploitation films of the 70s, earned Grier a plethora of accolades, and helped to revitalize her career. She received nominations from the Satellite, Golden Globe, and Screen Actors Guild Awards. Following this success, Grier was in the 1999 films "No Tomorrow," "Jawbreaker," "In Too Deep," and "Holy Smoke!"

Television Career: In 1979, Grier made her debut on the small screen in an episode of "Roots: The Next Generation." She followed this with parts on "The Love Boat," the television film "Badge of the Assassin," and the NBC crime drama "Miami Vice." After appearing in two episodes of "Night Court," she had a recurring role on "Crime Story." Subsequent credits included "The Cosby Show," "Frank's Place," "Midnight Caller," "Knots Landing," and "Pacific Station." In the mid-to-late 90s, Grier made guest appearances on "The Fresh Prince of Bel-Air," "Martin," and "Sparks," and hosted an episode of the sketch comedy series "Mad TV." She was also cast in a main role on the Showtime series "Linc's."

Grier had her biggest role on television in the Showtime series "The L Word," which ran from 2004 to 2009; she was part of a cast that included Jennifer Beals, Mia Kirshner, and Laurel Holloman. In 2010, Grier started a recurring role on the science-fiction series "Smallville," playing villain Amanda Waller. Another substantial role came in 2019, when she appeared in a main role on the ABC sitcom "Bless This Mess."

Personal Life: Grier has been in many relationships, but has never married. She dated basketball star Kareem Abdul-Jabbar just before he converted to Islam, but because Grier declined to convert herself, he ended up marrying someone else. Later, she dated comedians Freddie Prinze and Richard Pryor, both of whom struggled with drug addiction. Other high-profile romantic relationships were with boxing promoter Jimmie Wheeler, "Soul Train" host Don Cornelius, basketball player Wilt Chamberlain, and RCA Records executive Kevin Evans. 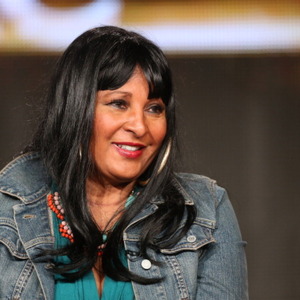