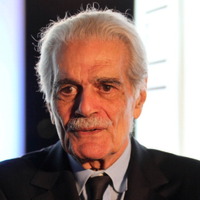 Omar Sharif Net Worth: Omar Sharif was an Egyptian actor who had a net worth of $2 million. Omar Sharif was born in Alexandria, Egypt in April 1932. Sharif studied at British Victoria College, the University of Cairo, and the Royal Academy of Dramatic Art in London. Sharif has over 100 acting credits to his name. His debut film roles came in Devil of the Sahara and Siraa Fil-Wadi in 1954. He starred as Sherif Ali in the 1962 film Lawrence of Arabia. For this role Sharif won two Gold Globe Awards for Best Supporting Actor – Motion Picture, and New Star of the Year – Actor. He was also nominated for an Academy Award for Best Supporting Actor. Sharif won this third Golden Globe Award for his role as the title character in 1965's Doctor Zhivago. For this role he won the Golden Globe for Best Actor – Motion Picture Drama. Sharif starred as Nick Arnstein in the 1968 film Funny Girl. He won a Cesar Award for Best Actor for his role as Monsieur Ibrahim in the 2003 film Monsieur Ibrahim et les fleurs du Coran. In addition to acting Sharif has authored five books. Omar was awarded the inaugural Sergei Eisenstein Medal from the United Nations Educational, Scientific, and Cultural Organization in 2005. Omar Sharif died on July 10, 2015 at the age of 83. Towards the end of his life, Omar reportedly experienced serious financial problems. Rumors circulated in 2014 that he was nearly bankrupt. Omar's representatives denied these rumors.