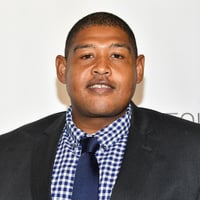 Omar Benson Miller Net Worth: Omar Benson Miller is an American actor who has a net worth of $2 million. Omar Benson was born in Detroit, Michigan in October 1978. Benson graduated from San Jose State University. He first appeared in the movie Obstacles in 2000. In 2005 he starred in the television series Sex, Love & Secrets. Miller starred in the TV series Eleventh Hour as Felix Lee in 2009. One of his best known roles came starring as Walter Simmons in the CBS television series CSI: Miami from 2009 to 2012. Omar has also starred in the movies Pizza Wars: The Movie, Sorority Boys, 8 Mile, Shall We Dance, Man of God, Get Rich or Die Tryin', Lucky You, Grindin', Things We Lost in the Fire, Miracle at St. Anna, The Express, Liquor Store Cactus, Blood Done Sign My Name, The Sorcerer's Apprentice, The Love Section, 1982, and Homefront. Miller was nominated for a Black Reel Award for Best Breakthrough Performance for Miracle at St. Anna in 2008.