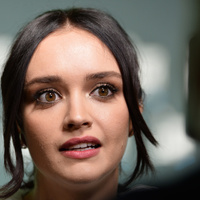 Olivia Cooke net worth: Olivia Cooke is an English actress who has a net worth of $2 million. Olivia Cooke was born in Oldham, Greater Manchester, England, United Kingdom in December 1993. In 2012 she appeared in the Autumn Term Tour video for One Direction. She debuted the same year starring as Meg Demoys in the TV mini-series Blackout and as Nancy Linnet in the TV mini-series The Secret of Crickley Hall. Her best known role has come starring as Emma Decody in the television series Bates Model since 2013. Cooke has starred in the movies The Signal, The Quiet Ones, Ouija, and Me and Earl and the Dying Girl. Cooke was nominated for a Fangoria Chainsaw Award in 2015 for Best Supporting Actress for The Quiet Ones. She is scheduled to star as Katie in the upcoming film Katie Says Goodbye.