Olga Merediz Net Worth: Olga Merediz is an American Broadway, television and film actress who has a net worth of $3 million. Olga Merediz was born February 15, 1956 in Guantanamo, Cuba. She is probably best known for her role as Abuela Claudia in the Broadway musical In the Heights, for which she received a Tony nomination for Best Performance by a Featured Actress in a Musical, although she recently emerged in a role in Netflix's wildly popular show Orange is the New Black. Her latest films include The Untitled Chris Rock Movie, where she worked with both Chris Rock and Rosario Dawson, and the independent film Like Sunday, Like Rain directed by Frank Whaley. Merediz was also in the film The Place Beyond The Pines with Ryan Gosling and the film The Angriest Man In Brooklyn alongside Robin Williams and Mila Kunis. Merediz also appeared with Jim Carrey in Mr. Popper's Penguins; with Robert Pattinson in Remember Me; with Kevin Spacey in K-Pax; with John Leguizamo in Fugly; with Meryl Streep in Music of the Heart; with Madonna in Evita; with Samuel L. Jackson in Changing Lanes. Other television show credits include Royal Pains, Blue Bloods, Law & Order SVU, The Jury (recurring), Hope & Faith (recurring), Pan Am, Law & Order (recurring). In addition to her theatre credits for In the Heights, her other Broadway credits include Reckless, Man of La Mancha and Les Misérables. She also appeared as Rosie in the production of Mamma Mia!. Merediz has appeared off-Broadway in such works as Women Without Men, The Human Comedy and The Public Theater's NYSF The Taming of the Shrew in Central Park. Merediz won a 2007 Drama Desk Award for Outstanding Ensemble Performance for her role in the off-Broadway run of In the Heights as well as a 2007 HOLA Award from the Hispanic Organization of Latin Actors for Outstanding Performance by a Featured Female Actor. In 2008, Olga Merediz received a Tony nomination for Best Performance by a Featured Actress in a Musical for the Broadway incarnation of In the Heights. 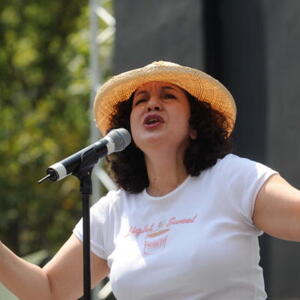