Octavia Spencer Net Worth and Salary: Octavia Spencer is an American actress who has a net worth of $14 million. Spencer is one of the most celebrated actresses in Hollywood today with countless awards and honors to her name. Her achievements include an Oscar, a Golden Globe, and three Screen Actors Guild Awards. After making her movie debut with the 1996 film "A Time to Kill," Spencer faded into relative obscurity before breaking through in 2011 with "The Help." Her critically-acclaimed performance earned her several honors and accolades.

Spencer received further praise for her role in "Fruitvale Station." She has since earned Academy Award nominations for a number of additional roles in films like "Hidden Figures" and "The Shape of Water." Towards the end of the 2010s, Octavia gained notoriety for appearing in films like "Snowpiercer, "Luce," "Ma," and "The Shack."

Outside of film work, Spencer has been quite active in the television world. After booking central roles in sitcoms like "Mom" and drama series like "Red Band Society," Octavia landed the lead role in the Apple TV+ series "Truth Be Told." Once again, she received heaps of praise from critics as a result of this role. Octavia has continued her acting career well into the 2020s with roles in series like "Self Made." Outside of acting, Spencer has released a number of children's books.

Early Life: Octavia Lenora Spencer was born on May 25th of 1970 in Montgomery, Alabama. Raised alongside six siblings, Octavia had to deal with her father's passing at the age of 13. Her mother then worked as as maid to provide for the large family.

After graduating from high school in 1988, Spencer attended Auburn University. Although Spencer majored in English during her college years, she also had a double minor in journalism and theater. Her academic achievements are especially impressive when you consider that she has struggled with dyslexia throughout her life.

Career: Spencer actually began her journey in the entertainment world as an intern, working behind the scenes as a production assistant on the set of the 1990 film "A Long Walk Home." Inspired by the film's leading star Whoopi Goldberg, Octavia relocated to Los Angeles in 1997 to pursue her own acting career. During these early years, she befriended filmmaker and actor Tate Taylor, with whom she would later collaborate on "The Help." Her film debut came in 1996 with "A Time to Kill." Again, Octavia was originally hired to work behind the camera as a casting assistant, but she was given the opportunity to audition for a part.

Over the next few years, Octavia Spencer became a regular addition to a number of films, although in fairly minor roles. These included "Never Been Kissed," "Big Momma's House," "Bad Santa," "Spider-Man," "Coach Carter," "Win a Date with Tad Hamilton!," and "Pretty Ugly People." She also established herself as a television actress during this period with roles in series like "Raising the Bar," "CSI: Crime Scene Investigation," "The Big Bang Theory," "Wizards of Waverly lace," "Titus," "30 Rock," "Dharma & Greg," "Becker," "ER," and "Grounded for Life."

Octavia began to make more substantial progress with starring roles in series like "Halfway Home," and "Ugly Betty." She also made her stage debut in 2003 with "The Trials and Tribulations of a Trailer Trash Housewife." This would prove to be the only stage work of her entire career, as she later admitted that she suffers from intense stage fight. Although her role in the film "Seven Pounds" was fairly brief, critics highlighted her performance and she was ranked as one of the funniest actresses in Hollywood.

After another few roles in films like "Halloween II" and "Love at First Hiccup," Spencer cemented her place among Hollywood's A-listers with 2010's "The Help." Octavia starred alongside Viola Davis, Emma Stone, and Bryce Dallas Howard, and the film was met with widespread praise from critics. Spencer was singled out for praise, and she won the Academy Award for Best Supporting Actress in 2012. In addition, Octavia won a Golden Globe and a BAFTA.

Over the next period, Octavia starred in films like "Fruitvale Station" and "Get On Up." She also starred in Steven Spielberg's series "Red Band Society." She then followed up with oles in films like "Black or White," "The Divergent Series: Insurgent," and "The Divergent Series: Allegiant" before booking a notable voice acting role in "Zootopia." In 2016, she returned to more period work with "Hidden Figures." Once again, she won a number of awards and was nominated for another Academy Award for Best Supporting Actress.

In 2017, she starred in another critically-acclaimed film, "The Shape of Water." For a third time, Spencer was nominated for an Academy Award for Best Supporting Actress, and she also won a number of other awards and honors for her performance in Guillermo del Toro's film. In 2018, Spencer joined the cast of  films like "A Kid Like Jake," "Instant Family," and "Green Book." In 2019, Octavia followed up with roles in films like "Luce" and "Ma" before booking the lead role in "Truth Be Told." It was also announced that she would be executive producing the Apple TV+ series.

Real Estate: In 2013, Octavia Spencer purchased a home in the Toluca Lake area of Los Angeles for $841,500. The three-bedroom home spans 1,714 square feet, and it features Spanish architectural influences. While the home is certainly luxurious, observers believed that this was clearly an investment home for Spencer, and not a primary residence. Anything below $1 million is typically not "fitting" for a celebrity, especially one of Octavia's prominence. That being said, information on any other homes owned by the actress is hard to come by, so perhaps it is her primary residence. 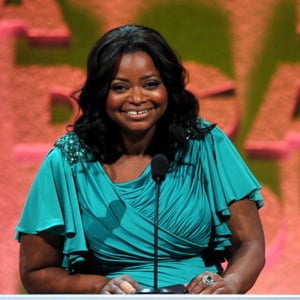