What is Noomi Rapace's Net Worth?

Noomi Rapace is a Swedish actress who has a net worth of $20 million. Noomi Rapace achieved international fame with her portrayal of Lisbeth Salander in the Swedish/Danish film adaptations of the Millennium series: "The Girl with the Dragon Tattoo," "The Girl Who Played with Fire" and "The Girl Who Kicked the Hornets' Nest." She is also known for playing Leena in "Beyond," Anna in "The Monitor", Madame Simza Heron in "Sherlock Holmes: A Game of Shadows," Dr. Elizabeth Shaw in "Prometheus," and "Beatrice in Dead Man Down."

Rapace was born on December 28, 1979 in Hudiksvall, Sweden. Her mother, Nina Noren, is a Swedish actress and her father, Rogelio Duran, was a Spanish Flamenco singer from Badajoz. Her original name was Noren, after her mother. Her parents did not remain together and she moved to Iceland with her mother and stepfather at the age of five. At the age of seven, she made her film debut in a role in the film "In the Shadow of the Raven."

After her exposure to film as a child, Rapace decided to pursue a career in acting. At the age of 15, she enrolled in a theatre school in Stockholm. In 1996, she made her television debut as the part of Lucinda Gonzales in the soap series, "Tre kronor." She then continued her studies at the acting school Skara Skolscen from 1998 to 1999. She then began taking a number of theater roles at Orioteatern, Teater Galeasen, Stockholms stadsteater, and the Royal Dramatic Theatre, all in Stockholm.

In 2007, she portrayed a teenage mother in the Danish film "Daisy Diamond" by director Simon Staho. The received a large amount of acclaim for her work, including the two top film awards in Denmark – the Bodil and Robert prizes – for Best Actress. The film was selected as one of the final entries at the San Sebastian International Film Festival.

In 2009, she received her biggest break yet when she was cast as the role of Lisbeth Salander in the Swedish-produced film adaptation of "The Girl with the Dragon Tattoo," based on Stieg Larsson's best-selling novel. She won the Guldbagge Award, Sweden's top film award, and was also nominated for a BAFTA Award and a European Film Award. She subsequently appeared in "The Girl Who Played with Fire" and "The Girl Who Kicked the Hornets' Nest." The films were later recut into a six-part miniseries called "Millennium" which aired in Sweden. Rapace received a nomination for the International Emmy Award for Best Actress. The film series later went on to be reshot and produced in Hollywood starring actress Rooney Mara.

Following the large success of the "Millennium" series, Rapace was able to launch her international career and begin taking English-speaking roles. She landed a role in Guy Ritchie's "Sherlock Holmes: A Game of Shadows" in 2011. She was soon after cast in Ridley Scott's film "Prometheus," which became a massive hit. In November of 2012, she appeared in a music video for the Rolling Stones' song "Doom and Gloom."

In 2013, she starred in the erotic thriller, "Passion," along with Rachel McAdams, which was a remake of the French thriller, "Love Crime." She also appeared in "Dead Man Down" with Isabelle Huppert and Colin Farrell. The following year, in 2014, she starred in another thrilled called, "The Drop," along with Tom Hardy, Matthias Schoenaerts, and James Gandolfini. She again starred alongside Tom Hardy in the 2015 film, "Child 44," by director Daniel Espinosa. She continued her work in thrillers in the film "Bright" and the spy thriller "Unlocked" alongside Michael Douglas, Orlando Bloom, Toni Collette, and John Malkovich. She then appeared in "What Happened to Monday" alongside Glenn Close and William Dafoe and the sci-fi thriller "Rupture" by director Steven Shainbert.

In May of 2015, she was cast to play famed opera singer Maria Callas in the biopic film directed by Niki Caro. In November of that year, she was considered for the role of Amy Winehouse in another biopic film by director Kirsten Sheridan. In 2017, she began working on the action thriller film, "Close," which was released in January of 2019 on Netflix. The same year, she appeared in "Angel of Mine" as the character Lizzie. In 2020, she appeared in two films – "The Secrets We Keep" and "Here are the Young Men." In 2021, she appeared in the film "The Trip" and also "Lamb," an Icelandic fantasy drama film by director Valdimar Johannson. The film was selected as the Icelandic entry for the Best International Feature Film at the 94th Academy Awards. The film received generally positive reviews and performed better in the United States than any other Icelandic film in history.

In 2001, Rapace married Swedish actress Ola Norell. Upon marrying, the couple decided to both take the surname Rapace, as it means "bird of prey" in French and Italian. They had a son together in 2003. In 2010, they filed for divorce, which was finalized a year later. 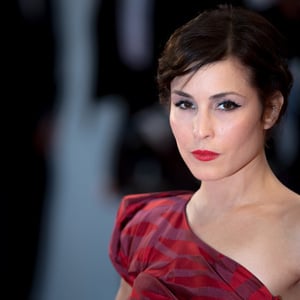