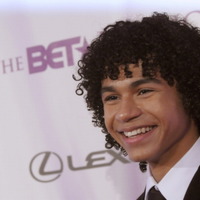 Noah Gray-Cabey net worth: Noah Gray-Cabey is an American actor and pianist who has a net worth of $2 million. Noah Gray-Cabey was born in Chicago, Illinois in November 1995. At just four years old he performed in many venues and traveled to Jamaica to tour with the New England Symphonic Ensemble. He became the youngest soloist ever to play with an orchestra at the Sydney Opera House at five years old. In 2003 Noah appeared on the television series Ripley's Believe It or Not!. As an actor Gray-Cabey starred as Franklin in the TV series My Wife and Kids from 2002 to 2005. From 2006 to 2009 he starred as Micah Sanders in the television series Heroes. He has starred in the movies Lady in the Water, Pizza Man, and The Volunteer. He has also appeared in episodes of the TV series CSI: Miami, Grey's Anatomy, Ghost Whisperer, and CSI: Crime Scene Investigation. He has won two Young Artist Awards and a TV Land Award. Noah Gray-Cabey is enrolled at Harvard University.