Ninel Conde Net Worth: Ninel Conde is a Mexican singer, actress, and television host who has a net worth of $8 million. Ninel Conde was born in Toluca, State of Mexico, Mexico in September 1970. Conde's self-titled debut studio album was released in 2003 on Universal Latin records at peaked at #3 in Mexico.

Her second album La Rebelde was released in 2005 and peaked at #5 in Mexico. Conde's third album Ayer y Hoy was released in 2011 on EMI Music at reached #12. Her singles "Callados" with Jose Manuel Figueroa, "Ingrato", and "Hoy tengo ganas de ti" have all charted. As an actress Ninel first appeared in the TV series Al derecho y al derbez and Bajo un mismo rostro in 1995. She starred as Alma Rey in the TV series Rebelde from 2004 to 2006 and had a recurring role in the series Ugly Betty in 2006. Conde starred as Rosario in the TV series Fuego en la sangre in 2008. From 2009 to 2010 she starred in the series Curse by the Sea and from 2012 to 2013 Conde starred in the TV series Love Rules. In 2005 she was nominated for an MTV Movie Award, Mexico. Ninel is dating businessman Giovanni Medina and announced that she was pregnant with a baby boy in April 2014. 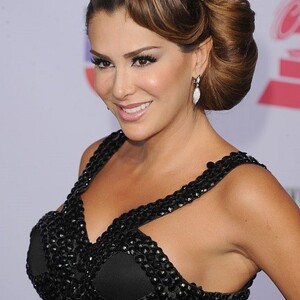