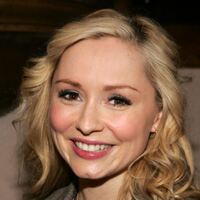 Nina Siemaszko net worth: Nina Siemaszko is an American actress who has a net worth of $1 million. She is perhaps best known for her recurring role on The West Wing as Eleanor Bartlet.

Nina Siemaszko was born in Chicago, Illinois in July 1970. She is the sister of Casey Siemaszko. She gained her first acting credit appearing in the 1986 film One More Saturday Night. Nina Siemaszko has also appeared in the films License to Drive, Tucker: The Man and His Dream, Lost Angels, Bed & Breakfast, Airheads, The American President, Suicide Kings, Goodbye Lover, Jakob the Liar, The Big Tease, The Haunting of Molly Hartley, and more. She has had reccuring roles on the TV series Sinatra as Mia Farrow in 1992, More Tales of the City as Mona Ramsey in 1998, and The West Wing as Eleanor Bartley from 2001 to 2006. She has also appeared in episodes of the TV series Lonesome Dove, Chicago Hope, NYPD Blue, Judging Amy, CSI: Crime Scene Investigation, Law & Order; Criminal Intent, Cold Case, Without a Trace, Eli Stone, Grey's Anatomy, and more.