She was born on November 9, 1988 in Great Neck, New York, in Nassau County on Long Island. She was three years old when she started singing and started taking vocal training lessons at the age of eight. She started attending John l. Miller-Great Neck North High School than in her sophomore year transferred to the 50-student Village School. She graduated from the Village School and also joined the theater program at the William A. Shine Great Neck South High School. There she was cast in roles in productions of Les Miserables, Sweeney Todd, Kiss Me, Kate and the opera Carmen. She made a guest appearance on Ugly Betty in 2009, the episode was titled "Dressed for Success" she also co-starred in the MTV mystery series Valemont also in 2009. The ABC Family series Huge premiered in June 2010 however it was canceled in September by the network. 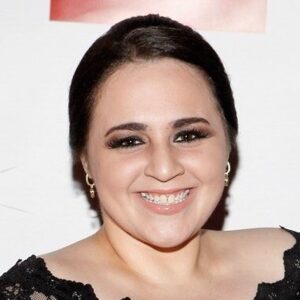