Nicollette Sheridan Net Worth: Nicollette Sheridan is an American actress originally from Worthing, England, who has a net worth of $25 million, Nicollette began her acting career on the short-lived primetime soap opera "Paper Dolls" in 1984. Later in the 80s, she gained recognition for her role on the soap opera "Knots Landing," and in the 2000s, won acclaim for her performance on the ABC series "Desperate Housewives." On the big screen, Sheridan has been in films such as "Spy Hard," "Beverly Hills Ninja," and "Code Name: The Cleaner."

Early Life and Career Beginnings: Nicollette Sheridan was born in 1963 in Worthing, Sussex, England, the daughter of 16-year-old actress Sally Adams. Before Sheridan even turned a year old, her father left the family. Later, in 1969, she became the stepdaughter of Telly Savalas when the actor married her mother after the two met on the set of "On Her Majesty's Secret Service." At the age of ten, Sheridan immigrated to the United States.

As a teenager, Sheridan got her career start as a fashion model, appearing in Vogue and on the cover of Cosmopolitan. She also starred in a television commercial for Martini, in which she delivered beverages on roller skates throughout Los Angeles. In 1984, Sheridan made her acting debut in ABC's short-lived primetime soap opera "Paper Dolls"; following its cancellation, she starred in Rob Reiner's romantic comedy film "The Sure Thing," with John Cusack.

"Knots Landing" and Television Movies: Sheridan got her big acting break in 1986, when she joined the cast of CBS's primetime soap opera "Knots Landing." Originally playing a recurring role, she became a series regular by 1988, and remained on the series until its conclusion in 1993. For her performance as Paige Matheson, Sheridan earned a Soap Opera Digest award for Outstanding Lead Actress: Prime Time.

In the late 80s and throughout the 90s, Sheridan starred in a plethora of television movies and miniseries. In 1990, she starred in the erotic drama "Deceptions," and portrayed Lucky Santangelo in an adaptation of Jackie Collins' "Lucky Chances." Subsequently, she had major roles in "Somebody's Daughter," "A Time to Heal," "Shadows of Desire," "Virus," "The People Next Door," "Dead Husbands," and "The Spiral Staircase," a remake of the 1946 film. Sheridan continued her made-for-television movie roles in the 2000s, starring in "Haven't We Met Before?," "Deadly Betrayal," "Deadly Visions," and the crime comedy "The Karate Dog," featuring Chevy Chase and Jon Voight.

"Desperate Housewives" and Later Television Career: After appearing in episodes of the sitcoms "Will & Grace" and "Becker," Sheridan landed her most acclaimed role yet as Edie Britt Williams on the comedy-drama mystery series "Desperate Housewives." The show was a major hit, garnering multiple Emmy, Golden Globe, and Screen Actors Guild Awards. As a series regular from 2004 to 2009, Sheridan herself received a Golden Globe Award nomination for Best Supporting Actress in a Series, Miniseries or Television Film.

Following "Desperate Housewives," Sheridan starred in the Hallmark Channel movies "Honeymoon for One," "The Christmas Spirit," and "All Yours," the latter two of which she also executive-produced. From 2018 to 2019, she played Alexis Morell Carrington on The CW remake of the hit 80s soap opera "Dynasty."

Salary: What was Nicollette Sheridan's salary on Desperate Housewives? $175,000 per episode. 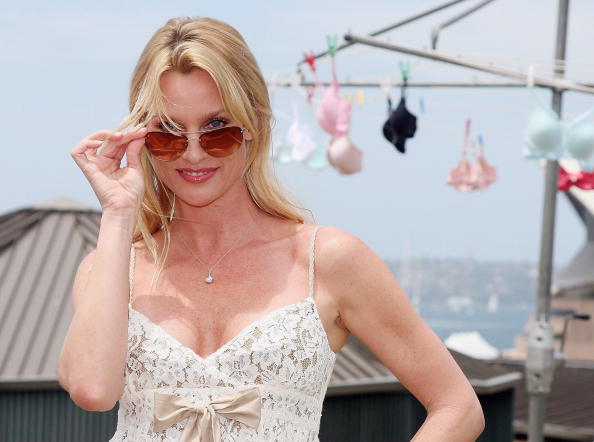 Film Career: Sheridan's film career has not been as prolific as her career on the small screen. After starring in "The Sure Thing," she had prominent roles in the 90s comedies "Noises Off," costarring Michael Caine and Carol Burnett; "Spy Hard," with Leslie Nielsen; and "Beverly Hills Ninja," starring Chris Farley. In 2000, she was in the erotic crime drama "Raw Nerve." This was followed by roles in three direct-to-video movies: the science-fiction crime drama ".com for Murder," the animated "Tarzan & Jane," and the action film "Lost Treasure." Subsequent credits have included the action comedy "Code Name: The Cleaner," the animated science-fiction film "Fly Me to the Moon," and the independent comedy "Jewtopia," an adaptation of the long-running play. Additionally, Sheridan made a cameo appearance in the 2014 black comedy "Let's Kill Ward's Wife."

"Desperate Housewives" Lawsuit: In 2010, Sheridan filed a $20 million lawsuit against ABC and Marc Cherry, the creator and producer of "Desperate Housewives." The lawsuit alleged that Sheridan was assaulted by Cherry on the show's set, and that she was subsequently fired when she reported the abuse. Sheridan also claimed that Cherry assaulted other cast members and writers. A judge granted permission for the case to go to trial, but dismissed Sheridan's allegations of harassment. At the trial in 2012, the judge dismissed the battery charge on a lack of evidence; by the end of the trial, the jury failed to reach a verdict, resulting in a mistrial. Sheridan attempted to secure multiple new trials over the following years, but was unable to make headway.

Personal Life: Sheridan dated teen idols Scott Baio and Leif Garrett in the 80s. In 1991, she wed actor Harry Hamlin, with whom she had starred in the television movie "Deceptions"; the pair divorced the next year. Following this, Sheridan dated singer Michael Bolton, and then Simon Main, whose jail sentence for drug trafficking ended their relationship. In 2004, Sheridan got engaged to personal trainer Nicklas Söderblom, but called off the engagement in 2005. That year, she rekindled her romance with Bolton, and got engaged to him in 2006; however, they broke off their engagement in 2008. In 2015, Sheridan married Aaron Phypers, with whom she split six months later and divorced in 2018. 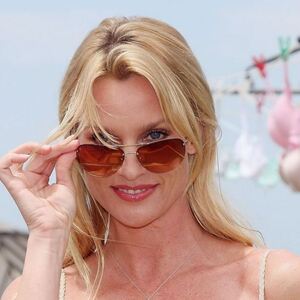