Nick Searcy Net Worth: Nick Searcy is an American actor who has a net worth of $500 thousand. Nick Searcy was born in Cullowhee, North Carolina in March 1959. Searcy is best known for playing the roles of Art Mullen on the TV series Justified and Deke Slayton on the TV mini-series From the Earth to the Moon. Searcy graduated from the University of North Carolina at Chapel Hill. He has over 100 acting credits to his name starting with the short Killin' Time in 1985. In 1994 Searcy starred as Brett in the television series Thunder Alley. From 1995 to 1996 he starred as Deputy Ben Healy in the TV series American Gothic. In 1998 he starred as Deke Slayton in the Tom Hanks produced miniseries From the Earth to the Moon. From 1998 to 2001 Nick starred as Nathan Ramsay in the series Seven Days. He starred as Barry in the TV series Rodney from 2004 to 2008 and as Roy Buffkin in Easy Money from 2008 to 2009. One of his best known roles has come as Art Mullen in the television series Justified from 2010 to 2015. He has also starred in the movies Fried Green Tomatoes, The Fugitive, The Real McCoy, Cast Away, One Hour Photo, Head of State, Runaway Jury, Welcome to Paradise, and Moneyball. In 1998 he won award from the Atlanta Film Festival and Hollywood Film Awards for Paradise Falls. 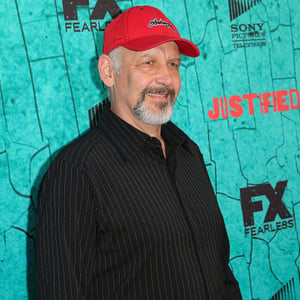