Nick Sandow net worth: Nick Sandow is an American actor and director who has a net worth of $1 million. As an actor he first starred in the movie Hand Gun in 1994. From 2000 to 2002 Sandow starred as Joe Lombardo in the television series Third Watch. Since 2013 he has starred as Joe Caputo in the Netflix series Orange Is the New Black.

Sandow has had recurring roles in the TV series How to Make It in America in 2010, Blue Bloods from 2010 to 2011, and Boardwalk Empire from 2011 to 2012. He has also starred in the movies The Mouse, No Exit, Arresting Gena, Grind, One Night Stand, A Brooklyn State of Mind, No Looking Back, Return to Paradise, Living Out Loud, On the Run, Uninvited, The Day the Ponies Come Back, Seven and a Match, Plan B, Dust, New Port South, Swimfan, Connie and Carla, The Collection, Resurrecting the Champ, The Lovebirds, The Accidental Husband, The Hungry Ghosts, Frame of Mind, The Sitter, The Fitzgerald Family Christmas, The Cold Lands, All Roads Lead, and Zarra's Law. Sandow won a Screen Actors Guild Award in 2015 for Orange Is the New Black. 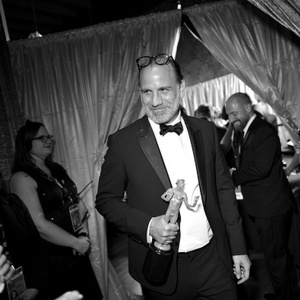