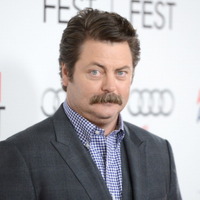 What is Nick Offerman's Net Worth and Salary?

Nick Offerman is an American actor and producer who has a net worth of $25 million. That is a combined net worth with his wife since 2003, actress Megan Mullally. Nick Offerman is probably best known for his role on the hugely-popular sitcom "Parks and Recreation," in which he plays Ron Swanson. In recognition of his work on this sitcom, Nick won a number of awards and honors, including a Television Critics Association Award and two nominations for Critics' Choice Television Awards for Best Supporting Actor in a Comedy Series.

In addition to his acting credits, Nick is an accomplished producer who has contributed to projects like "The House of Tomorrow," and he also booked a starring role in this film. Offerman is a famous voice actor, having voiced characters in films like "The Lego Movie," "Hotel Transylvania 2," "Sing," "Ice Age: Collision Course," and "The Lego Movie 2: The Second Part." In 2020, Nick hosted the Netflix documentary "Have a Good Trip: Adventures in Psychedelics."

Nicholas David Offerman was born on June 26th of 1970 in Joliet, Illinois. Raised in Minooka by a nurse and a high school social studies teacher in a Catholic household, Nick attended the University of Illinois after graduating from high school. He graduated in 1993 with a Bachelor of Fine Arts. After leaving college, he and a collection of fellow students founded the Defiant Theatre company in Chicago.

Offerman began his career in Chicago during the early 90s with theatre roles for various high-profile theatre companies. These included Steppenwolf and Goodman. While he was focused on an acting career, Nick also paid the bills by working as a fight choreographer and a master carpenter. His TV and film career truly began in the late 90s with movies like "Going All the Way," and shows like "ER" and "The West Wing."

During the early 2000s, he met figures like Amy Poehler and Megan Mullally. In 2001, he appeared in an episode of "Will & Grace," and he followed up with roles in shows like "24," "Gilmore Girls," and "Monk." In 2009, Nick was offered a regular role on the show "Parks and Recreations," and this became a defining moment in his career. Critics heaped praise upon Offerman for his contribution to the series.

During the next period, he also appeared in series like "Childrens Hospital" and the animated show "Axe Cop." In addition, Nick continued his film career with roles in movies such as "Sin City," "The Men Who Stare at Goats," and "21 Jump Street." After the end of "Parks and Recreation," Offerman went on to star in "Fargo." Throughout the next few years, Nick also became well-known for voice acting roles in movies like "Hotel Transylvania 2" and "The Lego Movie." In addition, Offerman has continued his theatre career over the years, and he is also a successful comedian who has toured extensively.

In 2003, Nick Offerman married actress Megan Mullally. They had met 18 months prior while acting in a play together. Over the course of their relationship, the pair have appeared in each other's sitcoms – with Megan appearing in "Parks and Recreation" and Nick appearing in "Will & Grace." They have subsequently appeared in a number of other films together and worked on the same projects as voice actors. In 2016, the couple embarked on a comedy tour together.

Nick Offerman earned a salary of $30,000 for each episode of "Parks and Recreation" during the peak of the show's popularity.

In 2012, Offerman and Mullally listed a home in LA for $12.65 million. The residence features just over 3,800 square feet of living space and three bedrooms. The pair obviously plan to collect a health profit margin on the sale, as they originally purchased the residence way back in 2003 for "just" $3.95 million. Notable details include clear views of the city and the Pacific Ocean beyond. The outdoor area features a neatly-terraced yard complete with a plunge pool. The property is also located in the Birds Street neighborhood, which is home to celebs like Keanu Reeves and Leonardo DiCaprio.

Also in 2012, it was reported that Nick and his wife were purchasing a home in the affluent neighborhood of Bel-Air. The couple acquired the LA home for a sum of $4.15 million. The luxurious residence spans a total of 5,168 square feet, and it boasts four bedrooms. Tucked away in a cul-de-sac above Stone Canyon Reservoir, the home represents an upgrade for Offerman – despite being much cheaper than the asking price of his previous home. Notable features include stunning views of the San Fernando Valley, polished concrete floors, and a small yet charming pool.

In 2013, Offerman and his wife managed to sell their home in The Birds, although they didn't receive their full asking price of $12.65 million. In the end, the pair settled upon a final selling price of $9.97 million. Despite the price drop of well over $2.5 million, Nick still walked away with a sizable profit margin. Remember, the couple originally purchased the home back in 2003 for under $4 million.