Nicholas Hoult net worth and salary: Nicholas Hoult is an English actor and model who has a net worth of $8 million dollars. He has appeared in a mix of both big-budget films and lesser-known independent films, and is a talented stage actor as well.

Early Life: Nicholas Caradoc Hoult was born on December 7, 1989 in Wokingham, Berkshire, England, and began acting while he was still in elementary school. His middle name is Welsh and translates to "The Beloved One." Hoult spent most of his childhood growing up in Sindlesham in the borough of Wokingham. His older siblings were interested in performing from an early age and would take classes and go on auditions. He began to accompany them and developed his own interest in acting. Hoult attended the Arborfield Church of England Junior School, but left at the age of 12 to attend acting school at Sylvia Young Theatre School. He was a member of the local choir and played trombone as a child.

Acting Career: He made his professional on-camera debut in the 1996 film, "Intimate Relations", when he was seven years old. He had been cast at the age of five. He then appeared on several TV series including "Casualty," "Silent Witness," "The Bill," "Judge John Deed" and "Doctors."  He first gained notice for his award-winning work in the film, "About a Boy", opposite Hugh Grant when he was 13 years old. Ironically he won that role because at the time Nicholas came across as a bit of a wimp, whereas today he is somewhat of a heartthrob. "About a Boy" was a huge commercial success and grossed over $130 million worldwide and received wide praise by critics. His next two films were box office flops: Richard E. Grant's film "Wah-Wah" in 2005 and his Hollywood debut "The Weather Man", where he played the son of a TV weather presenter (Nicholas Cage) undergoing a midlife crisis. His performance in both films went largely unnoticed.

Breakthrough: Hoult became a British household name when he was cast in the lead role of Tony Stonem in the teenage drama "Skins." It was 2006, and he was a student at Sixth Form College Farnborough when he got the role. The show was a huge success, running for six seasons (although Hoult only appeared in two due to the cyclical nature of re-casting the show) and his performance was well received. "Skins" won the BAFTA Audience Award and Hoult was nominated for the Golden Nymph Award for Best Actor in a Drama Series. Hoult decided to leave school during his time on "Skins" and focus solely on acting.

Up next, Hoult made his West End theatre debut in the coming of age play "New Boy." It premiered at Trafalgar Studios and boasted record-breaking sales, which was mostly attributed to Hoult's enormous popularity from appearing in "Skins." In March 2009, Hoult had a small role in "Clash of the Titans", which was panned by critics but grossed nearly $500,000,000 worldwide. Hoult next appeared in 2009's "A Single Man", after the original actor cast in his role left the film a few days before filming began. The Oscar-nominated "A Single Man" opened to widespread acclaim and was a box office success. For his work, Hoult was nominated for the BAFTA Rising Star Award at the 2010 ceremony. Later that year, Hoult voiced the character of Elliot in the action role-playing game "Fable III."

Nicholas gained widespread popularity amongst American audiences when he appeared as Hank McCoy / Beast in the "X Men" film series. In 2012, he began filming "Mad Max: Fury Road" in the Namibian desert. Hoult played Nux, a terminally ill slave, which required him to follow a strict diet to lose considerable amounts of weight and shave his head. "Fury Road" opened to critical acclaim in May 2015 and grossed over $378 million worldwide, making it the highest-grossing film in the "Mad Max" franchise. In 2013, Hoult had starring roles in two major films: "Warm Bodies" "Jack the Giant Slayer." In 2014, Hoult appeared in the dystopian science-fiction film "Young Ones".  The same year, he reprised his role as Hank McCoy in "X-Men: Days of Future Past." After his 2015 success with "Mad Max"'s release, he released three more movies: "Dark Places," "Kill Your Friends," and "Equals", all of which were critical fails and ended up being the lowest-grossing films of his career thus far. However, the next year he was back on top with the 2016 release of blockbuster "X-Men: Apocalypse."

It was 2017 that Hoult transitioned to independent films. He starred in "Collide" that year and the Drake Doremus directed romantic drama "Newness." Hult also starred in a number of biographical and historical films that year. He co-starred with Benedict Cumberbatch in "The Current War", which opened to mixed reviews. In 2018, he returned to the mainstream when he co-starred in the critically acclaimed "The Favourite." He also appeared in "Watership Down." In 2019, Hoult reprised his role in the X-Men film "Dark Phoenix." In May 2020, Hoult starred in the Hulu miniseries "The Great," which received wide critical acclaim.

Personal Life: On the relationship front, Nicholas Hoult has had an on-again rumored relationship with superstar actress Jennifer Lawrence. They ended up dating for five years. Since 2017 he has been linked to American model Bryana Holly Bezlaj. They welcomed a son together in 2018.

Hoult supports numerous charities and is an active philanthropist. He was appointed an ambassador for the first National Society for the Prevention of Cruelty to Children. Since 2009, he has been involved with the Teenage Cancer Trust, visiting patients and lending support to those in need and helping promote its awareness campaigns. He participated in the Rickshaw Run in 2017 across India to raise funds for Teenager Cancer Trust and World Wide Fund for Nature. Hoult was inducted into the NSPCC Hall of Fame in 2010 for his contributions to the campaign against child cruelty. As part of a Christian Aid project aimed at providing clean water and sanitation, Hoult visited Nairobi, Kenya. During his stay, he met with locals and helped clean facilities. 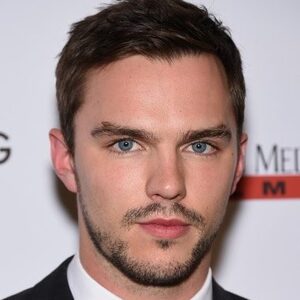