What is Nichelle Nichols' net worth?

Nichelle Nichols is an American actress, singer, producer, and author who has a net worth of $500 thousand. Nichols is best known for playing Lieutenant Uhura on the original iteration of "Star Trek" (1966–1969), and she has reprised her role in six "Star Trek" films. Later in her career, Nichelle was very popular at conventions. She could earn $10,000 – $50,000 to appear at conventions, depending on the size and her commitment. Before she was forced to retire due to health issues, Nichols was earning hundreds of thousands of dollars per year thanks to these conventions. Nichelle has more than 60 acting credits to her name, including the films "Snow Dogs" (2002) and "Are We There Yet?" (2005) and the soap opera "The Young and the Restless" (2016).

Nichelle Nichols was born Grace Dell Nichols on December 28, 1932, in the Chicago suburb of Robbins, Illinois. She grew up with mother Salish, father Samuel, and younger brother Thomas. Her father worked in a factory and served as mayor and chief magistrate of Robbins. Sadly, Nichelle lost her brother, a member of the Heaven's Gate cult, in March 1997 when the members committed mass suicide. Nichols began her show business career as a teenager, working with Duke Ellington's band as a dancer at age 16. Ellington asked her to sing for him and was so impressed that he decided she should front the band.

In 1961, Nichols starred in the Oscar Brown musical "Kicks and Co." and caught the attention of "Playboy" publisher Hugh Hefner, who hired her to appear at the Chicago Playboy Club. She also played the title role in a Chicago production of "Carmen Jones" and appeared in a production of "Porgy and Bess" in New York. Her first film appearance was an uncredited role as a dancer in the 1959 film adaptation of "Porgy and Bess," which starred Sidney Poitier and Dorothy Dandridge. Nichelle then appeared in the films "Tarzan's Deadly Silence" (1966), "Made in Paris" (1966), "Mister Buddwing" (1966), and "Doctor, You've Got to Be Kidding!" (1967), and she graced the cover of "Ebony" magazine in January 1967. In 1964, she guest-starred on the Gene Roddenberry series "The Lieutenant," and two years later, he cast Nichols in the role that would change her life: Lieutenant Uhura on the science-fiction series "Star Trek." The show premiered on NBC on September 8, 1966, and aired 79 episodes before it was canceled in 1969. Nichelle considered leaving the series during the first season in pursuit of a career on Broadway, but Dr. Martin Luther King Jr. convinced her to stay, telling her, "You simply cannot abdicate, this is an important role. This is why we are marching. We never thought we'd see this on TV."

Nichelle appeared in the 2002 hit "Snow Dogs," which grossed $115 million at the box office, followed by another hit, "Are We There Yet?" ($97.9 million), in 2005. She had a recurring role as Nana Dawson on NBC's "Heroes" in 2007, then she appeared in the films "Tru Loved" (2008), "The Torturer" (2008), "This Bitter Earth" (2012), "Renegades" (2016), "American Nightmares" (2018), and "Surge of Dawn" (2019). Nichols also had a recurring role as Lucinda Winters on "The Young and the Restless" in 2016, and the following year, she guest-starred on "Renegades," "Downward Dog," and "Star Trek: Renegades" (not as Uhura) and appeared in the TV movie "Sharknado 5: Global Swarming." In May 2019, she announced that she was retiring from convention appearances and would be embarking on a "farewell tour" over the next year. Her final appearance was set for May 2020 at the Nichelle Nichols Farewell Convention in Burbank, California, but it was postponed due to the COVID-19 pandemic. 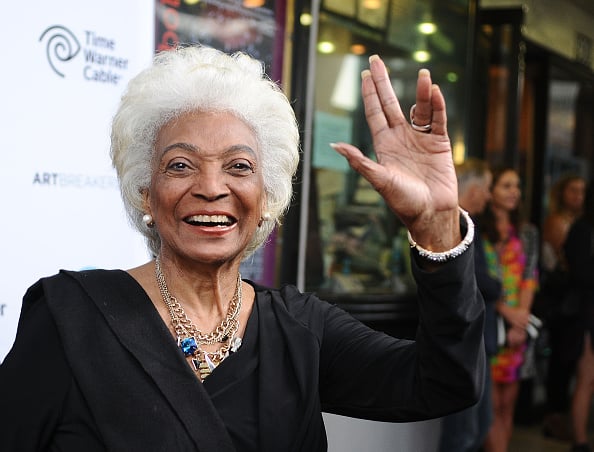 Nichelle was in a romantic relationship with "Star Trek" creator Gene Roddenberry in the 1960s, and she has said that they split up before the series began. When Roddenberry passed away in 1991, Nichols sang a song she had co-written, "Gene," at his funeral. Nichelle married dancer Foster Johnson in 1951, and they divorced later that year. The two welcomed son Kyle on August 14, 1951. Nichols then wed Duke Mondy in 1968, and they divorced in 1972. In 2012, she visited the White House to meet with President Barack Obama, and she tweeted about the experience, "Months ago Pres Obama was quoted as saying that he'd had a crush on me when he was younger. I asked about that & he proudly confirmed it! President Obama also confirmed for me that he was definitely a Trekker! How wonderful is that?!" In June 2015, it was announced that Nichelle had been hospitalized after suffering a mild stroke, and in 2018, it was revealed that she had been diagnosed with dementia. In August 2020, Nichols' son filed a lawsuit against Gilbert Bell, Nichelle's manager/caretaker, alleging that he had committed "financial elder abuse." The lawsuit stated that Bell "intentionally misappropriated income earned by Ms. Nichols, by siphoning cash from Ms. Nichols' appearances at conventions, inappropriately dispersing the money Ms. Nichols earned, and misappropriating funds from Ms. Nichols' financial accounts." Kyle moved Nichelle to New Mexico in November 2020, and he serves as his mother's primary caregiver.

After "Star Trek" ended, Nichols began working with NASA to recruit females and minorities to become astronauts. Some of the candidates she recruited were Dr. Sally Ride, Air Force Colonel Guion Bluford, Dr. Judith Resnik, and Dr. Ronald McNair. In the mid-1980s, Nichelle became a member of the National Space Society's board of governors. In 2015, she took part in an eight-hour NASA mission in which she flew aboard the Stratospheric Observatory for Infrared Astronomy Boeing 747SP to analyze the atmospheres of Saturn and Mars. In September 1976, Nichols and other "Star Trek" cast members attended the dedication ceremony for Enterprise, the first space shuttle, in Palmdale, California. In 2010, Nichelle visited Johnson Space Center to tour Mission Control and the space shuttle simulator, and in 2001, NASA named Asteroid 68410 "Nichols" due to Nichelle's work as "a global ambassador for NASA, a recruiter of astronauts and an inspirer of millions as an author of science fiction" as well as her role on "Star Trek."

In 2016, Nichols received a Lifetime Achievement Award from the Academy of Science Fiction, Fantasy & Horror Films, and she earned a Best Supporting Actress nomination for "Star Trek: The Motion Picture" in 1980. She was inducted into the Online Film & Television Association Hall of Fame in 2015, and Germany's Golden Camera awards honored her with a Millennium Award for "Star Trek" in 1999. Nichelle earned a Daytime Emmy nomination for Outstanding Special Guest Performer in a Drama Series for "The Young and the Restless" in 2017, and she received an NAACP Image Award nomination for Outstanding Actress in a Motion Picture for "Star Trek IV: The Voyage Home" in 1987. Nichols and her "Star Trek" co-star William Shatner have shared two TV Land Award nominations: Most Memorable Kiss in 2006 and TV Moment That Became Headline News in 2007. Nichelle received Comic-Con International's Inkpot Award in 2018, and Los Angeles Mission College presented her with an honorary degree in 2010. In 1992, Nichelle received a star on the Hollywood Walk of Fame. 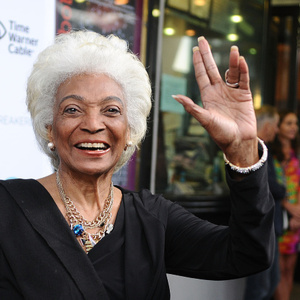