Nia Vardalos Net Worth: Nia Vardalos is a Greek Canadian actress, screenwriter, director, singer and producer who has a net worth of $10 million. Born Antonia Eugenia "Nia" Vardalos on September 24, 1962, in Winnipeg, Manitoba, Canada, she first rose to prominence with her 2002 feature film My Big Fat Greek Wedding. Being both the writer and star of the low budget, independently produced flick, Nia Vardalos gained overnight fame.

The film turned out to be a huge critical and commercial success, earning Vardalos an Academy Award Nomination for Best Writing, a Golden Globe Nomination for Best Actress in a Motion Picture Musical or Comedy and a Screen Actors Guild Award Nomination. This led a television series to spawn from the movie, My Big Fat Greek Life, in 2003. Unlike the film, the series was a complete failure and was canceled after seven episodes. As a director, she made her debut in 2009 with the independent feature I Hate Valentine's Day. But the film telling the story of a florist finding a romance received only a limited release. It was followed by My Life in Ruins (2009), the first American production that obtained permission to film at the ancient citadel Acropolis. Otherwise, the movie was a moderate success. In 2011, Vardalos teamed up with Tom Hanks and together they wrote the romantic comedy Larry Crowne. In 2016 she wrote and starred in the follow-up film My Big Fat Greek Wedding 2. Vardalos has also had recurring roles in the TV series My Boys, Law & Order: Special Victims Unit, The Catch, and Graves. 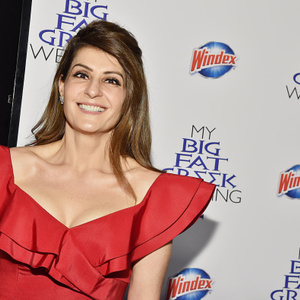