He is famous for his ability to put on a convincing Spanish accent, as he comes from Hispanic roots. Nestor Carbonell is also notorious for his "impossibly thick" eyelashes. Contrary to what some people may think, Carbonell does not wear eyeliner or makeup of any kind. In fact, sometimes he is given concealer to "tone down" his eyelashes.

Early Life: Nestor Garbon Carbonell was born in New York City on December 1st, 1967. Although he is an American citizen, his family has strong Spanish roots. Both his parents are Spanish, and his family often traveled to nations like Mexico City, the Bahamas, Venezuela, and England. Carbonell's family also has strong links to Cuba, as his grandfather, Jose Manuel Cortina, was a famous Cuban diplomat. His father also wrote a book about the Sovietization of Cuba. Carbonell was also raised as a Roman Catholic.

Because Nestor Carbonell spent much of his youth in Caracas, Venezuela, he attended The British School in the capital for many years. After his family moved to Massachusetts, he continued his studies at Deerfield Academy, a co-ed boarding school. As luck would have it, he studied alongside Matthew Fox, the actor who would later star alongside him in Lost. He was accepted into Harvard and graduated with a Bachelor of Arts in English.

Early Career: Like many actors, Nestor Carbonell's very first roles was in a soap opera called As the World Turns. It was a guest role, but it helped kickstart the young actor's career. During the early 90s, Carbonell followed up his initial success with roles in television series such as Law & Order, Melrose Place, A Different World, and more.

In 1995, Nestor Carbonell also flexed his muscles as a theater actor after joining the cast of Getting Away With Murder, a Broadway play. Carbonell actually played two separate roles in the production. More TV roles soon followed, and Carbonell made major strides when he booked a recurring role in Suddenly Susan for four seasons.

In the year 2000, Carbonell worked as a screenwriter for the first time, writing the script for Attention Shoppers and also playing the lead role. By the mid-2000s, Nestor had booked recurring roles on shows like The Tick, Cold Case, and Strong Medicine. He had also landed guest roles on Monk, Day Break, and House.

2006 was a big year for Nestor Carbonell, as he appeared in the film Smokin' Aces and appeared on the hit show Lost for the first time. He appeared as Richard Alpert in the third season of Lost, becoming a fan favorite due to the mysteries that surrounded his character. Carbonell was due to leave Lost after just one season, however, as he had booked another role on the CBS series Cane. Because of the Writers Guild of America strike from 2007 to 2008, Cane was canceled. This allowed Carbonell to unexpectedly return to Lost in season four, much to the surprise and joy of fans. Carbonell appeared in even more Lost episodes in the fifth season and was then "upgraded" to a main cast member for the sixth and final season, ending one of Carbonell's most successful acting projects to date.

Another major accomplishment for Nestor Carbonell was booking the role of Sheriff Alex Romero in the hit series Bates Motel, appearing in four seasons until the series finale. Although he first appeared in a relatively minor role, he was upgraded once again and became a recurring cast member by the end of the series. He also directed numerous episodes of Bates Motel.

Nestor Carbonell is also a talented voice actor and has worked on many animated TV series and movies. These include Kim Possible, Justice League Unlimited, and Big Hero 6: The Series, among others. He also worked on the 2010 animated film Noah's Ark: The New Beginning.

Carbonell has also appeared in numerous commercials – the most notable of which have been in the Spanish language. He starred in a Pepsi commercial alongside Eva Longoria that was aimed at Spanish audiences, and he also starred in a Spanish-speaking Heineken commercial.

Acting Style: Nestor Carbonell often plays Hispanic characters, and he is extremely talented when it comes to thick, Spanish accents – so much so that for much of his career, it was assumed that Carbonell's voice actually sounded like that. Nestor Carbonell is also a fluent Spanish speaker, and has displayed this talent on more than one occasion. A notable example was an episode of Lost where almost all Carbonell's lines were in Spanish.

Personal Life: Nestor Carbonell married Shannon Kenny in 2001. Shannon Kenny is an Australian actress, and her career has intersected with that of her husband on more than one occasion. They met while acting in the same TV show, and they also co-starred together in Attention Shoppers. In addition, they both worked on Batman-related projects, as she voiced a character on the animated Batman Beyond TV series. The couple has two children together. 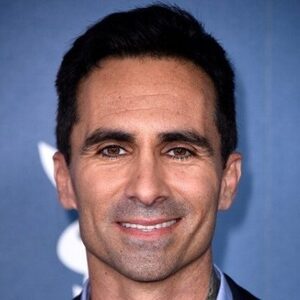