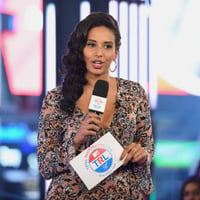 Nessa Diab net worth: Nessa Diab is an American radio and television personality who has a net worth of $2 million. Nessa Diab was born in May 1988 and studied at the University of California, Berkeley. She has interviewed artists and celebrities on YouTube and KYLD. She starred in the MTV television series Girl Code since 2013, for seasons 1 – 4. Diab has also hosted The Nessa Show on Hot 97 on radio. She has also hosted or appeared on episodes of the TV series VH1 Big Morning Buzz, The Real World Aftershow, Real World: Ex-Plosion Reunion, MTV2 Jobs That Don't Suck, Snooki & Jwoww Aftershow, Teen Mom Aftershow, Girl Code Live, The Challenge: Battle of the Bloodlines Reunion, and The Challenge: Rivals III Reunion. Since 2018 she has hosted the NBC talk show Talk Stoop. Nessa has been dating NFL quarterback Colin Kaepernick since 2015.