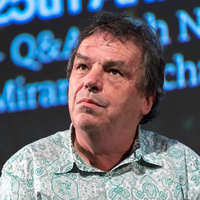 Neil Jordan Net Worth: Neil Jordan is an Irish film director, screenwriter, and novelist who has a net worth of $15 million. Neil Jordan was born in Sligo, Ireland in February 1950. He studied at St. Paul's College, Raheny and University College Dublin. He first wrote the TV movie Miracles & Miss Langan in 1979. Jordan wrote the movie Traveller in 1981. He wrote and directed the film Angel in 1982. He has served as a writer, producer, and/or director for the movies The Company of Wolves, Mona Lisa, High Spirits, The Miracle, The Crying Game, Michael Collins, The Butcher Boy, In Dreams, The End of the Affair, The Good Thief, The Actors, Breakfast on Pluto, Ondine, Intermission, The Last September, The Courier, Byzantium, The Brave One, Not I, Interview with the Vampire: The Vampire Chronicles, and We're No Angels. Jordan has won over 40 awards including an Oscar in 1993 for Best Writing, Screenplay Written Directly for the Screen for The Crying Game, two BAFTA Awards, three Gemini Awards, a Writers Guild of America Award and a Writers Guild of Great Britain. He has also been nominated for Golden Globes for Best Director and Best Screenplay.