What is Neal McDonough's Net Worth and Salary?

Neal McDonough is an American actor and producer who has a net worth of $7 million. During a multi-decade career, Neal McDonough has appeared in many films, though some of his most prominent roles were in television series such as "Band of Brothers," "Boomtown," and "Suits."

McDonough was born on February 13, 1966 in Dorchester, Massachusetts. His parents, Catherine and Frank, had emigrated from Ireland and owned and operated a motel. He grew up in a Catholic family with his brothers. He attended Barnstable High School and then Syracuse University. Though he had been offered a number of baseball scholarships at other schools, he picked Syracuse because he thought they had the best theater department. While at Syracuse, he was a member of Sigma Chi Fraternity and studied theater, graduating with his bachelor's degree in 1988. He then continued his classical theater training at the London Academy of Music and Dramatic Art.

McDonough began auditioning for roles in the early 1990s, landing a role in "Darkman" as a dockworker in 1990 and several minor roles in television. Through the mid-1990s, he booked episodes of shows like "JAG,' "Murphy Brown," and "NYPD Blue." He also had roles in the films "Angels in the Outfield," "Star Trek: First Contact," and "A Perfect Little Man." For his role in "A Perfect Little Man," He won the Best Actor Award at the Atlantic City Film Festival.

In 1996, he voiced the role of Bruce Banner in "The Incredible Hulk" for 21 episodes. He then appeared in several episodes of "Martial Law" and in the television film, "Balloon Farm," in 1999. One of his first real breakthroughs came in 2001 when he was cast as First Lieutenant Lynn "Buck" Compton in the miniseries "Band of Brothers," appearing in eight episodes. The show is a war drama miniseries based on the non-fiction book of the same name by Stephen E. Ambrose. It was highly successful, both with audiences and critics, and won the Emmy and Golden Globe awards in 2001 for best miniseries.

McDonough's next recurring role came when he was cast in the series, "Boomtown" in 2002, appearing in 24 episodes as the Deputy District Attorney David McNorris. The show was also well-received and McDonough specifically won the Satellite Award in the Best Supporting Actor in a Television Drama Series category in 2004. He had also appeared in the popular movie, "Minority Report" in 2002.

In 2004, McDonough booked the role of Dr. Stephen Connor on "Medical Investigation," appearing for 20 episodes. He appeared in the films, "The Guardian," "The Last Time," "Machine," and "Flags of our Fathers," all in 2006. From 2008 to 2009, he played a main role in the fifth season of the popular series, "Desperate Housewives" as character Dave Williams. The show was nominated for a Screen Actors Guild Award in the Outstanding Performance by an Ensemble during the season he worked on the show. 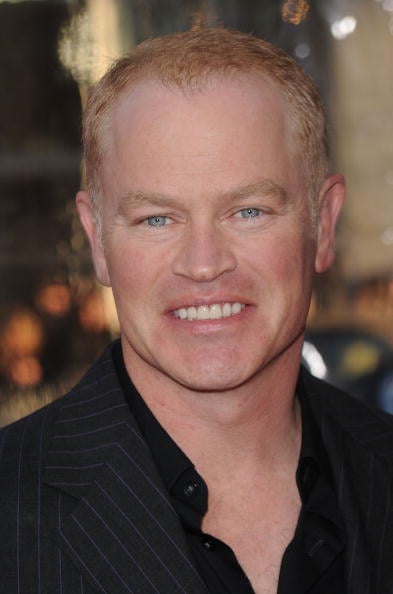 In 2012, McDonough appeared in the third season of "Justified" on FX as a mobster from Detroit. For his work, he was nominated for a Critics' Choice Television Award and won the Satellite Award for Best Supporting Actor in a Series. He was cast the following year in "Mob City" and also in "Suits." His role on suits was a substantial one, as he appeared on 17 episodes of the massively successful show between 2014 and 2019. He also booked a recurring role as the same character on "Arrow," "The Flash," and "Legends of Tomorrow," all of which aired between 2015 and 2021.

Outside of film and television, McDonough has also done some work in video games. Reprising his role from 1996, he voiced the role of Bruce Banner in the 2005 video game, "The Incredible Hulk: Ultimate Destruction." He then voiced the role of an admiral in the 2009 game, "Rogue Warrior" and then a character in "Captain America: Super Soldier" in 2011. In 2015, his voice appeared in two games: "Skylanders: SuperChargers" and "Call of Duty: Black Opps III."

McDonough is a devout Catholic. In 2003, he married Ruvé Robertson, a South African model. The two had met in the United Kingdom while McDonough was filming "Band of Brothers." Together they have five children born from 2005 to 2014 – Morgan, Catherine, London, Clover, and James. The family resides in the seaside community of Tsawwassen, British Columbia.

McDonough has turned down roles and been fired from others because of his refusal to perform and kissing or sex scenes out of respect for his wife and his faith. He was fired from the set of the ABC dramedy "Scoundrels" based on this belief.