Nazanin Boniadi Net Worth: Nazanin Boniadi is an Iranian-British actress who has a net worth of $2 million. Nazanin Boniadi was born in Tehran, Iran in May 1980. Nazanin's parents moved to London when she was just an infant. She moved to the United States and earned her Bachelor's Degree from the University of California, Irvine.

While studying at UCI she won the Chang Pin-Chun Undergraduate Research Award and was an Assistant Editor-in-Chief UCI's undergraduate medical newspaper. In 2007 she made her feature film debut as Taylor in the movie Gameface and also starred as Leyla Mir in the TV series General Hospital: Night Shift. She also played Leyla Mir in General Hospital from 2007 to 2009. In 2008 Boniadi starred as Amira Ahmed in the movie Iron Man. Since 2010 she has had a recurring role as Nora in the TV series How I Met Your Mother. Since 2013 she has starred as Fara Sherazi on the television series Homeland. In 2014 Nazanin also starred as Adnan Salif in the TV series Scandal. Boniadi was a keynote speaker at Congresswoman Eddie Bernie Johnson's 13th annual A World of Women for World Peace conference. In 2004 she had a brief relationship with Tom Cruise as selected by the Church of Scientology. In 2008 she was nominated for an Image Award for Outstanding Actress in a Daytime Drama Series for her role in General Hospital. 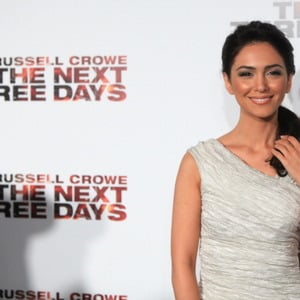