What is Nathan Fillion's Net Worth and Salary?

Nathan Fillion was born Nathan Christopher Fillion on March 27, 1971, in Edmonton, Alberta, Canada. His parents, June (better known as "Cookie") and Bob, were both English teachers, and Nathan's older brother, Jeff, also became a teacher. Fillion grew up in the Mill Woods neighborhood in Edmonton and studied at Holy Trinity Catholic High School. After graduation, he attended Concordia University College of Alberta and the University of Alberta, where he joined the Kappa Alpha Society.

Fillion made his TV debut in the 1993 Canadian television film "Ordeal in the Arctic," and the following year, he moved to New York City, appeared in the film "Strange and Rich," and landed the role of Joey Riley Buchanan on the soap opera "One Life to Live." He left the series in 1997 but returned as a guest star on two episodes in 2007. Nathan moved to Los Angeles and was cast as Johnny Donnelly on ABC's "Two Guys, a Girl, and a Pizza Place" (later known as "Two Guys and a Girl") in 1998. He appeared in 60 episodes of the series, and around that time, he also played Pvt. James Frederick "Minnesota" Ryan in "Saving Private Ryan" (1998) and guest-starred on "The Outer Limits" (1999) and "Pasadena" (2002). In 2002, Fillion began playing Captain Malcolm Reynolds on the Joss Whedon series "Firefly," which he has called his "favorite job ever." Over the next few years, he reunited with Whedon to guest-star on the last five episodes of "Buffy the Vampire Slayer" in 2003 and show off his singing chops in 2008's "Dr. Horrible's Sing-Along Blog," which was so popular it "broke the internet." In 2003, Nathan guest-starred on six episodes of NBC's "Miss Match," followed by an appearance on "Lost" (2006) and a lead role on the Fox series "Drive" (2007). 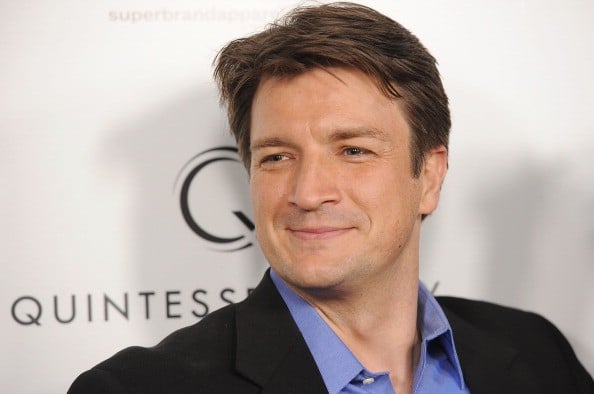 Fillion earned several award nominations for 2005's "Serenity," then appeared in the 2006 horror film "Slither." In 2007, he returned to the horror genre for "White Noise 2: The Light" and co-starred with Keri Russell in "Waitress," which was later adapted into a Broadway musical. From 2007 to 2008, he played Dr. Adam Mayfair on 12 episodes of ABC's "Desperate Housewives," and the cast received a Screen Actors Guild Award nomination for Outstanding Performance by an Ensemble in a Comedy Series during his time on the show. From 2009 to 2016, Nathan starred as mystery writer Richard Castle on "Castle," which aired 173 episodes over eight seasons. The show's popularity led to the 2013 video game "Castle: Never Judge a Book by its Cover" as well as books and graphic novels based on the fictional author's Nikki Heat and Derrick Storm characters. In 2011, he voiced Hal Jordan / Green Lantern in the animated film "Green Lantern: Emerald Knights," then reprised the role in "Justice League: Doom" (2012), "Justice League: The Flashpoint Paradox" (2013), "Justice League: Throne of Atlantis" (2015), "The Death of Superman" (2018), and "Reign of the Supermen" (2019).

In 2007, Nathan co-founded Kids Need to Read with author PJ Haarsma. The non-profit organization is dedicated to providing underfunded libraries with books, and initially money was raised through online auctions of autographed memorabilia from "Firefly" and "Serenity." Fillion is also a supporter of Charity: Water and has raised more than $600,000 for the organization. Nathan became an American citizen in 1997, and he is a comic book collector and video game fan. He has lent his voice to numerous video games, including "Jade Empire" (2005), "Halo 3" (2007), "Family Guy: The Quest for Stuff" (2014), and "Destiny" (2014).

In 2003, the Academy of Science Fiction, Fantasy & Horror Films honored Fillion with the Cinescape Genre Face of the Future Award for "Firefly," and he was named Best Actor award at the 2005 SFX Awards for "Serenity." "Waitress" earned him a Feature Film Award for Acting at the 2007 Newport Beach Film Festival, and he has received four TV Guide Awards for "Castle," winning Favorite Actor in 2014 and sharing a Favorite Couple Who Should award and two Favorite TV Couple awards with Stana Katic. Nathan has earned four People's Choice Awards for "Castle" as well: Favorite TV Drama Actor in 2012 and 2013 and Favorite Crime Drama TV Actor in 2015 and 2016.