Natascha McElhone net worth: Natascha McElhone is an English actress who has a net worth of $5 million. Natascha McElhone was born in Surrey, England in December 1969. She took Irish dancing lessons as a child and graduated from the London Academy of Music and Dramatic Art. She started acting in theater before making her television debut in the series Ruth Rendell Mysteries in 1990.

McElhone made her film debut in the 1996 movie Surviving Picasso. In 2005 she starred as Sister Josepha Montafiore in the TV mini-series Revelations. Since 2007 she has starred in one of her best known roles as Karen on the television series Californication. She has also starred in the movies The Devil's Own, Mrs. Dalloway, The Truman Show, What Rats Won't Do, Ronin, Love's Labour Lost, Contagion, Killing Me Softly, Laurel Canyon, Feardotcom, City of Ghosts, Solaris, Ladies in Lavender, Guy X, Big Nothing, The Secret of Moonacre, Blessed, The Kid, Thorne: Sleepyhead, The Sea, Romeo & Juliet, and Believe. McElhone has been nominated for a Saturn Award, IFTA Award, MTV Movie Award, OFTA Film Award, and a Satellite Award. Her book of letters to her dead husband tilted After You: Letters of Love, and Loss, to a Husband and Father was published in 2010. 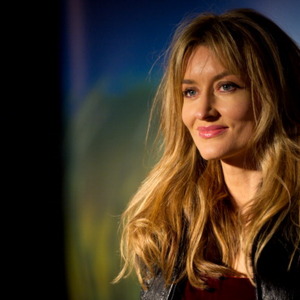