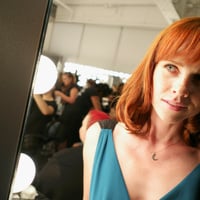 Natalya Rudakova Net Worth: Natalya Rudakova is a Russian actress who has a net worth of $5 million. Natalya Rudakova was born in Leningrad, Russian SFSR, USSR in February 1985. At 17 Natalya's parents moved with her to New York. Rudakova worked as a hairdresser at a salon and was discovered by Luc Besson while crossing the street. Besson gave her acting lessons and cast her as the lead for his movie Transporter 3 in 2008 where she starred as Valentina. In 2010 Natalya starred as Alex in the movie The One and as Shelly in the film A Novel Romance. She starred in the 2014 short Waiting for a Train and is scheduled to star in the 2015 film Before the Snow as Natalie. She also appeared in the 2010 TV mini-series documentary The American Dream: An Illusion or Reality for Belarus Immigrants.