How much is Nadine de Rothschild Worth?

Nadine de Rothschild Net Worth: Nadine de Rothschild is a French actress and author who has a net worth of $100 million. Nadine de Rothschild was born in Saint-Quentin, France in April 1932. Nadine is part of the Rothschild family and is the widow of banker Edmond Adolphe de Rothschild. She started her career as a model for painter Jean-Gabriel Domergue. Her debut role came in the short Un chien et madame in 1949. The same year she appeared in the films Mission in Tangier and Woman Hunt. She would go on to star in the movies The Sleepwalker, Le passage de Venus, Leathernoose, An Artist with Ladies, The Case Against X, The Lighthouse-Keeper's Daughter, Children of Love, Women of Paris, Une vie de garcon, Royal Affairs in Versailles, Ma petite folie, Men Think Only of That, Madame du Barry, Human Cargo, Napoleon, The Lowest Crime, Diamond Machine, The Width of Pavement, Ce soir les jupons volent, Fernand cow-boy, Mam'selle Striptease, Folies-Bergere, Man and Child, The Hunchback of Notre Dame, Cinq millions comptant, Miss Catastrophe, Crazy in the Noodle, Give Me My Chance, Lock Up Your Spoons, En bordee, Girls at Sea, The Possessors, Cigarettes, Whiskey and Wild Women, Los cobardes, Visa pour l'enfer, Hot Money Girl, and Deuxieme bureau contre terroristes. She married Edmond in 1962 and had a son Benjamin de Rothschild. Nadine became a Baroness with an Austrian title. She wrote an autobiography and a book on manners among others. 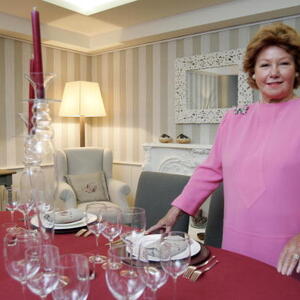