Nadia Sawalha net worth: Nadia Sawalha is an English actress and television presenter who has a net worth of $4 million. Nadia Sawalha was born in Wandsworth, London, England in November 1964. She is best known for playing the role of Annie Palmer on the TV series EastEnders. She got her started at the Italia Conti Academy of Theatre Arts and acted on stage.

Sawalha first starred in the movie Clockwise in 1986. From 1992 to 1994 she had a recurring role on the television series Second Thoughts. She has also appeared in epidotes of the TV series Bottom, True Crimes, The Bill, 99-1, and Casualty. In 2007 Nadia won the reality TV series Celebrity MasterChef. She has also appeared on the TV series Passport to the Sun, Live Talk, Celebrity Driving School, Behind Bars Live, The One Show, Wanted Down Under, Heir Hunters, Daybreak, The Wright Stuff, Sunday Side Up, and Loose Women. Sawalha is featured as a contestant on the 2015 season of Celebrity Big Brother. Celebrity Big Brother 15 debuted in January 2015 on Channel 5 in the United Kingdom. 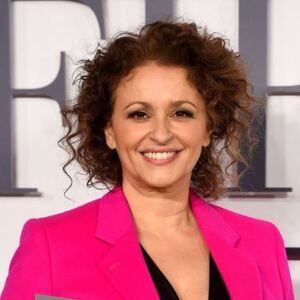