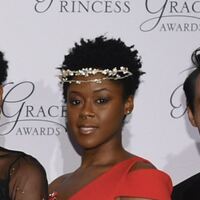 Moses Ingram net worth: Moses Ingram is an American actress and writer who has a net worth of $500 thousand. She is best known for starring on the TV mini-series The Queen's Gambit.

Moses Ingram graduated from the Yale School of Drama. While attending Baltimore School for the Arts she won a theater award from the National Society of Arts and Letters. She is best known for starring as Jolene on the Netflix TV mini-series The Queen's Gambit in 2020. Ingram first appeared in the short Candace in 2018. She also appeared in the short Sis in 2020. In 2021 she was set to star as Lady Macduff in the movie Macbeth. Moses Ingram wrote the short Day 74. in 2020. The Queen's Gambit was based off Walter Tevis's 1983 novel. The series was created by Scott Frank and Allan Scott and starred Anya Taylor-Joy, Bill Camp, Isla Johnston, and others.