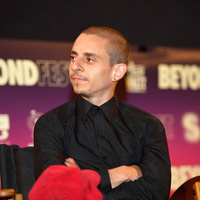 Moisés Arias Net Worth: Moisés Arias is an American actor who has a net worth of $600 thousand. Moisés Arias was born April 18, 1994 in New York City, New York. He is best known for his role as Rico on Hannah Montana. Arias entered the entertainment circuit just out of elementary school as a guest star on Everybody Hates Chris. Subsequently, he appeared on The Suite Life of Zack and Cody and in the movie Nacho Libre as Jorge Sugantes. In 2006, Arias was cast as Rico on Hannah Montana, first as a recurring character before being promoted to a series regular by the second season. This casting opened plenty of doors for Arias, who then landed roles on Beethoven's Big Break, Astro Boy, Hannah Montana: The Movie, and Marvin the Martian, among others. Arias was also cast in his own Disney show called Moisés Rules. He appeared in music videos for Pearl Jam, and the Jonas Brothers video for their song SOS, and Parmalee, and the 2006 film Nacho Libre in a minor role. He participated in the Guadalajara Film Festival (2009) during the presentation of the movie The Perfect Game with Eva Longoria. Arias appeared in Beethoven's Big Break in 2008. He then appeared on the ESPN family of networks as a roving 'sideline' reporter conducting interviews with fans and players at the 2009 Little League World Series. He appeared in Wizards of Waverly Place, playing Max, (Jake T. Austin)'s conscience. Arias and his brother directed a series of YouTube films under the username Moiswashere. In 2009, they worked on a film called Motocross Madness. In mid-2012, Arias filmed The Kings of Summer, which had its premiere on January 19, 2013, at the 2013 Sundance Film Festival and was received with rave reviews.