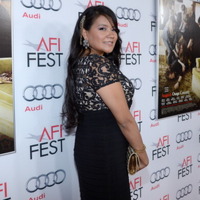 Misty Upham Net Worth: Misty Upham was an American actress who had a net worth of $50 thousand dollars. Misty Upham was born in Kalispell, Montana in July 1982 and passed away in October 2014. Misty was Native American and a member of the Blackfeet Nation. She made her acting debut in 2002 when she starred in the movie Skins, the TV series Auf Wiedersehen, Pet, and the TV movie Skinwalkers. Upham also starred in the films Expiration Date, Frozen River, The Dry Land, Django Unchained, Jimmy P., August: Osage County, and Cake. She starred in the TV movies DreamKeeper and Edge of America and in the shorts Burn the Wagons, Mascots, Every Other Second, and Without Fire. She also had a recurring role as Leila Stilwell in the television series Big Love in 2010. She is scheduled to star in the upcoming 2015 film Crawlspace. Upham won awards from the Alliance of Women Film Journalists, American Indian Film Festival, Capri, Hollywood, and the Hollywood Film Festival. Upham left her sister's apartment in October 2014 on the Muckleshoot Reservation and had not been heard from a week later. On October 16, 2014 Misty Upham's body was found at the bottom of a cliff in a wooded area.