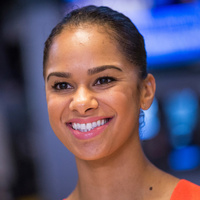 Misty Copeland Net Worth: Misty Copeland is an American ballet dancer who has a net worth of $500 thousand dollars. Misty Copeland was born in Kansas City, Missouri in September 1982. Copeland dances for American Ballet Theatre. She became the first African-American soloist for ABT in two decades and the third overall. Although she did not start dancing until 13 she has been considered a prodigy. At 15 a custody battle was fought between her mother and her ballet teachers. She ended up moving home to study under an ABT teacher. Misty won the Los Angeles Music Center Spotlight Award in 1997 for being the best dancer in Southern California. She joined the Studio Company in 2000 and became a member of the corps de ballet in 2001 before becoming a soloist in 2007. Copeland can be considered a classical ballet dancer who is contemporary and sophisticated. In 2014 has performed the lead role of Swanilda in Coppelia at the Metropolitan Opera House and the double role of Odette and Odile in Swan lake in Brisbane, Australia. She authored the book Life in Motion: An Unlikely Ballerina in 2014.