Missi Pyle Net Worth: Missi Pyle is an American actress and singer who has a net worth of $3 million. Missi Pyle was born in Houston, Texas in November 1972. Pyle has over 100 acting credits to her name. Her first appearance came in the movie The Cottonwood in 1996. In 2007 she had a recurring role as Amanda Pontell in the TV series The Wedding Bells.

From 2006 to 2008 she played the recurring role of Renee Winger on Boston Legal. Pyle appeared on The Sarah Silverman Program from 2007 to 2010 and in the TV series The Life & Times of Tim in 2010. In 2012 Pyle starred as Sue on the TV series Greetings from Home. From 2013 to 2014 she starred as Eileen in the television series Cleaners. In 2014 she also starred as Dina in the series Jennifer Falls. Missi has starred in the movies As Good as it Gets, Galaxy Quest, Josie and the Pussycats, Let It Snow, Home Alone 4, Bringing Down the House, Big Fish, Along Came Polly, 50 First Dates, Soul Plane, DodgeBall: A True Underdog Story, Anchorman: The Legend of Run Burgundy, Charlie and the Chocolate Factory, Harold & Kumar Escape from Guantanamo Bay, The Art, Percy Jackson: Sea of Monsters, A Haunted House 2, and Gone Girl. Pyle was nominated and MTV Movie Award for Best Fight in 2004. She is one half of the country-rock band Smith & Pyle with actress Shawnee Smith. 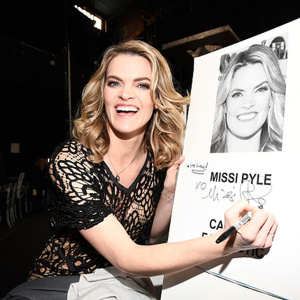