How much is Millie Bobby Brown Worth?

Millie Bobby Brown was born in Marbella, Malaga, Spain in February 2004. Prior to Stranger Things Brown starred as Madison O'Donnell in the 2014 TV series Intruders. In 2013 she had a recurring role as Young Alice in the series Once Upon a Time in Wonderland. Brown has also appeared in episodes of the TV series NCIS, Modern Family, and Grey's Anatomy. She also starred in the music video "Find Me" by Sigma featuring Birdy. Brown was nominated for a People's Choice Award for Favorite Sci-Fi/Fantasy TV Actress for Stranger Things in 2017.

In 2019 she appeared in Godzilla: King of the Monsters and is slated to appear in the 2020 sequel Godzilla vs Kong.

Enola Holmes Salary: In November 2019 it was revealed that Millie will earn $6.1 million to star in Enola Holmes, a film in the Sherlock Holmes universe. She serves as a producer on the movie which comes with a separate $500,000 payday. She could also earn an additional $800,000 in bonuses if the movie performs well and is guaranteed $7.5 million if there's a sequel. 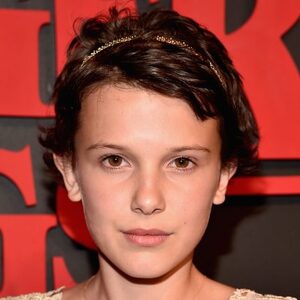