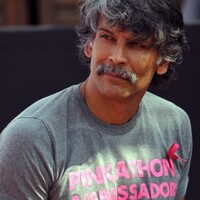 Milind Soman net worth: Milind Soman is an Indian actor, producer, and model who has a net worth of $20 million. Milind Soman was born in Scotland, United Kingdom in November 1965. In 1995 he appeared in the Alshia Chinai music video "Made in India". Soman starred in the television series Captain Vyom before getting into film acting. He has starred in movies including 16 December, Paiyaa, Agni Varsha, Asoka, Bhram, Bheja Fry, Gandha, Valley of Flowers, The Flag, Arn – the Knight Templar, and Say Salaam India. Soman produced the 2003 film Rules: Pyaar Ka Superhit Formula. He competed in the reality TV series Fear Factor: Khatron Ke Khiladi in 2010. In 2012 Soman ran 1,500 kilometers in 30 days to spread environmental awareness and became a Limca Record holder. He also held an Indian National Swimming Championship for four years and completed the Ironman challenge in his first try. He caused controversy when he posed nude with Madhu Sapre in an ad for Tuff Shoes. In 2003 Soman was nominated for a Screen Weekly Award.