How much is Miles Teller Worth?

Miles Teller net worth and salary: Miles Teller is an American actor who has a net worth of $10 million. He is known for starring in such films as "Whiplash," the "Divergent" series, and "The Spectacular Now."

Early Life: Miles Teller was born on February 20, 1987 in Downingtown, Pennsylvania, and grew up in Pennsylvania, Florida, and New Jersey. Teller's mother Merry is a real estate agent and his father Michael is a nuclear power plant engineer. He has two older sisters, Erin and Dana. At Lecanto High School, Miles played alto saxophone in a rock band. He was also a drummer for a church youth group band and was president of the drama club. Additionally, he played piano and guitar and was on the baseball team, hoping to make baseball into a professional career. During high school, Teller earned extra income by working as a server at a local restaurant called Crackers. He starred in his school's production of "Footloose," and would later appear in the remake of the film in 2011.

In 2007, Teller was a passenger in a car that lost control at 80mph. The car flipped eight times and Teller was left with multiple scars from the accident. Teller went on to earn a Bachelor of Fine Arts from Tisch School of the Arts at New York University in 2009. He then studied method acting at the Lee Strasberg Theatre and Film Institute.

Career: After graduating from Tisch, he began appearing in various short films, and in 2009, he guest-starred on the television show, "The Unusuals". He gained widespread notice for his award-winning performance in the feature film, "Rabbit Hole", in 2010. Nicole Kidman had handpicked Teller for the role. Since then, he has worked steadily on feature film projects. His recent credits include co-starring and starring roles in "Footloose", "Project X", "21 and Over", "Get a Job", and "The Spectacular Now". He and his co-star Shailene Woodley were awarded the Sundance Film Festival Special Jury Prize for Dramatic Acting for their work in "The Spectacular Now".

He is also known for the "Divergent" series, also starring alongside Shailene Woodley. He appeared in all three installments, including "Insurgent" and "Allegiant" in 2015 and 2016, respectively. Teller also appeared in "That Awkward Moment", "Two Night Stand", and "War Dogs". In 2014, Miles Teller was nominated for several awards for the Oscar-winning movie "Whiplash", in which he starred as a student drummer who tries desperately to impressive his abusive jazz teacher, played by J. K. Simmons. He earned just $8,000 for appearing in "Whiplash." Teller went on to play Mister Fantastic in the reboot film "Fantastic Four." Teller played arms dealer David Packouz in 2016's "War Dogs" and Vinny Paz in the biopic boxer film "Bleed for This" that same year. In 2017, Teller starred in drama films based on true stories including "Only the Brave" and "Thank You for Your Service." In 2018, Teller starred as Martin Jones in the crime drama web series "Too Old to Die Young."

In 2020 he finished filming the "Top Gun" sequel "Top Gun: Maverick", in which he plays Bradley Bradshaw the son of the late pilot Goose. The film is slated for a 2021 release.

Teller reportedly lost the lead role in the movie "La La Land", which was directed by the same person behind "Whiplash", because he asked for $6 million instead of the $4 million that was being offered.

Real Estate: In 2016 Miles spent $3 million on a home in Studio City, California.

Personal Life: In September 2019, Miles married his longtime girlfriend, model Keleigh Sperry, on the Hawaiian Island of Maui. They were married at a Sacred Hearts Mission Catholic Church and had a reception just down the road at the Ritz Carlton. 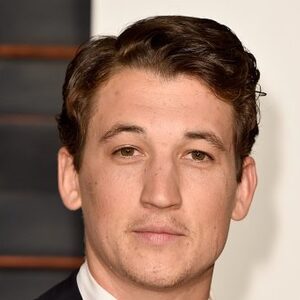