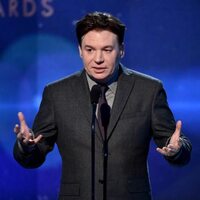 What is Mike Myers' Net Worth and Salary?

Mike Myers is a Canadian-born actor, comedian, writer, and producer who has a net worth of $200 million. Mike Myers began his career as a child actor in commercials, and is best known for his work on the show "Saturday Night Live" and the "Wayne's World", "Austin Powers," and "Shrek" film franchises.


Michael Joh Myers was born in Scarborough, Ontario, on May 25, 1963. His father, Eric Myers, was an insurance agent, and his mother Alice "Bunny" E. Myers (née Hind) was an office supervisor and Royal Air Force veteran. They had immigrated to Canada from Liverpool, England. Myers has two older brothers, Paul and Peter. He grew up in suburban Toronto, where he attended Sir John A. Macdonald Collegiate Institute, and graduated from Stephen Leacock Collegiate Institute in 1982.

Myers began appearing in commercials as early as the age of two. When he was ten years old, he starred in a commercial for British Columbia Hydro alongside Gilda Radner. After graduating from high school, he joined The Second City Canadian touring company. Subsequently, he moved to the United Kingdom where he was a founding member of the improv group The Comedy Store Players. Around that same time, Mike joined comedian Neil Mullarkey on the British children's program Wide Awake Club. In 1986 he moved back to Toronto, where he joined the cast of The Second City Toronto in their main stage show. In 1988, he moved to Chicago where he trained, performed, and taught at the Improv Olympic.


In 1989, Myers joined the cast of NBC's Saturday Night Live. At SNL, Mike performed legendary characters such as Linda Richman, Dieter, Wayne Campbell and many more. The Wayne character landed Myers and fellow SNL cast member Dana Carvey their own movie adaptation, which was titled "Wayne's World" (1992). "Wayne's World" was both a critical and commercial success, grossing $183 million worldwide. After two more films, "Wayne's World 2" (1993) and "So I married an Axe Murderer" (1993), and another three years on "Saturday Night Live", Myers took a temporary hiatus from performing.

Myers reemerged in 1997 with the film "Austin Powers: International Man of Mystery". It was followed by the sequels "Austin Powers: The Spy Who Shagged Me" (1999) and "Austin Powers in Goldmember" (2002). The sequels were wildly successfully, grossing $312 million and $296.6 million respectively. In the Austin Powers franchise, Myers played not only the title role of Austin Powers, but the roles of Dr. Evil, Fat Bastard, and Goldmember as well. 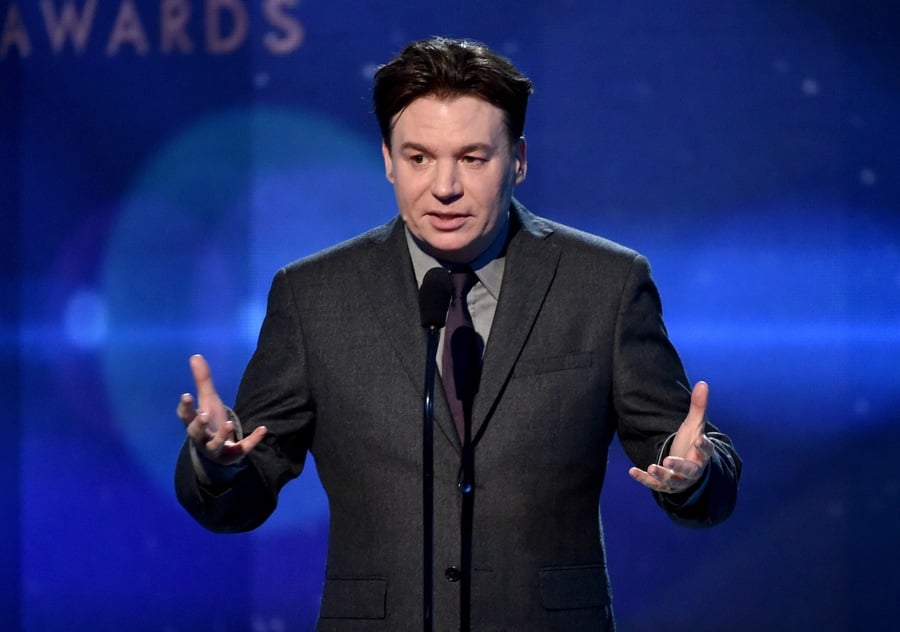 Another highly successful franchise that Myers was part of was the DreamWorks animated "Shrek" series, in which he voiced the titular role of Shrek the ogre. The franchise's films include "Shrek" (2001), "Shrek 2" (2004), "Shrek the Third" (2007), "Shrek the Halls" (2007), and "Shrek Forever After" (2010). He also provided his voiced for Shrek 4-D, a theme park ride at Universal Parks and Resorts. The Shrek films were some of the most successful for DreamWorks; the first one grossed $484.4 million worldwide, the second grossed $919.8 million, and the third grossed $798.9 million.

In June 2000, Universal Pictures sued Myers for $3.8 million for backing out of a contract to make a feature film. The original project was supposed to be based on his SNL character Dieter, and the original contract was $20 million. Myers countersued, saying he did not honor the original contract because his script was not ready, and eventually he and Universal reached a settlement where he agreed to make another film with them. The resulting movie was "The Cat in the Hat" (2003).

One of his rare non-comedic projects was the 1998 film "54". Although it was not critically or commercially successful, Myers received positive attention for his efforts. Other projects he has been involved in include "The Love Guru", which he co-wrote, co-produced, and starred in; Quentin Tarantino's "Inglourious Basterds" (2009); and supporting roles in "Terminal" (2018) and "Bohemian Rhapsody" (2018). Among Myers' awards are four MTV Movie Awards, an Emmy Award and two Canadian Comedy Awards.

The above salaries just cover his acting duties on the respective films. Make has earned hundreds of millions of dollars as a producer and creator of his various franchises, especially Shrek.

The film "Supermensch: The Legend of Shep Gordon" (2013), was Myers' directorial debut. It was screened at the 2013 Toronto International Film Festival. Myers is a member of the band Ming Tea along with Susanna Hoffs and Matthew Sweet. Together, they performed the songs "BBC" and "Daddy Wasn't There" for the Austin Power films. As an avid fan of the Monty Python comedy troupe, Myers appears in the documentary telefilm "Monty Python: The Meaning of Live"; he also appeared on stage on their final night of their live show "Monty Python Live (Mostly)" at the O2 Arena.

Myers dated actress and comedy writer Robin Ruzan in the late 1980s after they met at an ice hockey game in Chicago. They married in May 1993, eventually divorcing in December 2005. In 2006, he began dating Kelly Tisdale. The couple married in New York City in late 2010, and have three children together.

In January 2017 Mike paid $14.675 million for a 4-bedroom condo in New York City's Tribeca neighborhood. For some reason he was not satisfied with the property, selling it just four months later for $14 million. That's a good way to burn around $700k.

In 2007 he paid $8 million for a home in New York City's SoHo neighborhood. At one point he listed this property for sale for $17 million, but ultimately took it off the market.