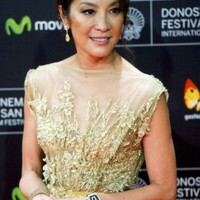 Michelle Yeoh Net Worth: Michelle Yeoh is a Malaysian actress who has a net worth of $40 million. Born in Ipoh, Perak, Malaysia, in 1962, Michelle Yeoh studied at London's Royal Academy of Dance. When she was 20 years old, she won the Miss Malaysia pageant and the Queen of the Pacific pageant. Though she didn't win, Yeoh represented her native country at London's Miss World competition the same year. She made her on-screen debut the next year as Miss Yeung in "The Owl vs. Bombo". Yeoh's best-known roles came in "Tomorrow Never Dies" of the James Bond franchise and in "Crouching Tiger, Hidden Dragon". She earned a BAFTA Award Best Actress nomination in 2000 for the part. Her other roles include appearances in "The Children of Huang Shi", "The Mummy: Tomb of the Dragon Emperor", "Reign of Assassins", "Kung Fu Panda 2", "Crouching Tiger, Hidden Dragon II: The Green Destiny", "The Heroic Trio", "Butterfly and Sword", "Tai Chi Master", "and "Once a Cop". Yeoh was part of a documentary made in Vietnam by the Asian Injury Prevention Foundation. She's heavily involved in animal welfare and works to save the South China Tiger. Yeoh was formerly married to businessman Dickson Poon and has been committed to motor sport executive Jean Todt since at least 2008.