Michelle Forbes net worth: Michelle Forbes is an American actress who has a net worth of $3 million. Michelle Forbes was born in Austin, Texas in January 1965. She signed with the William Morris Agency at 16 and trained at the High School for the Performing and Visual Arts. In 1988 she had a recurring role as Dr. Sonni Wells on the soap opera Guiding Light. From 1991 to 1994 Forbes starred in the television series Star Trek: The Next Generation. She starred as Dr. Julianna Cox on the TV series Homicide: Life on the Street from 1996 to 1998. In 2000 she starred as Dr. Lyla Garrity in the series Wonderland and as Helen York in the series The District. From 2002 to 2003 she starred as Lynne Kresge on the television series 24. Forbes starred as Samantha Brinker on the TV series Prison Break from 2005 to 2006. From 2008 to 2009 she starred as Kate Weston on the series In Treatment. From 2008 to 2009 she starred as Maryann Forrester in the TV series True Blood. Forbes starred as Mitch Larsen on the TV series The Killing from 2011 to 2012. In 2013 she starred as Gail McLeod on the television series Chicago Fire. She starred as Retro Girl in the TV series Powers in 2015. Forbes has also starred in the movies Love Bites, Kalifornia, Swimming with Sharks, Roadflower, Just Looking, Black Day Blue Night, Escape from L.A., Confessions of an American Girl, Dandelion, and The Hunger Games: Mockingjay – Part 2. She won a Satellite Award in 2009 and has been nominated for two Screen Actors Guild Awards and a Primetime Emmy Award. 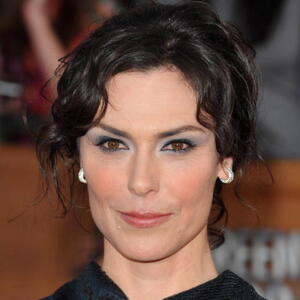