Michelan Sisti Net Worth: Michelan Sisti is a Puerto Rican actor, director, puppeteer and musician who has a net worth of $2 million. Michelan Sisti was born May 27, 1949 in San Juan, Puerto Rico. He is probably best known for his role as Michelangelo in Teenage Mutant Ninja Turtles and the sequel Teenage Mutant Ninja Turtles II: The Secret of the Ooze. Prior to becoming a 'Turtle', he had an eighteen-year theatrical career which included five Broadway shows. Since his first stint with TMNT, Sisti moved from New York City to Los Angeles and has continued to work with The Jim Henson Company, Walt Disney Studios and scores of other movie and television productions. He has performed many full-bodied characters in Jim Henson's Creature Shop productions. Sisti has also served as performance coordinator and animatronic puppeteer on other projects and as an assistant/additional puppeteer on various Muppet commercials and appearances. Sisti was originally offered the role of Barkley on Sesame Street in 1993, but chose to stay in Los Angeles, and recommended his friend Bruce Connelly, who had previously worked for a mime company. Prior to working with Henson, Sisti was a musician and theatrical actor for twenty years. Sisti performed in many NY productions on and off-Broadway. His Broadway credits include the 1981 revival of Fiddler on the Roof (as Motel) and the Joe Raposo-scored Raggedy Ann and Andy (as Panda, opposite Ivy Austin). In 1987, he appeared in the Broadway revival of Cabaret, as Bobby and as understudy for star Joel Grey. It was during this production that Grey lost his voice and for more than thirty performances Sisti sang and spoke the Emcee role over the sound system, while Grey acted onstage. Later shifting to film and television, Sisti guest starred on Star Trek: The Next Generation, as the Ferengi Trol in the 1994 episode Bloodlines and later guest-starred on Babylon 5. Sisti also appeared in fellow Henson puppeteer Julianne Buescher's short film Resculpting Venus as Dr. Moreau. 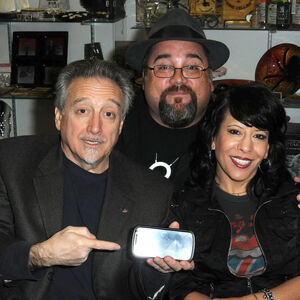