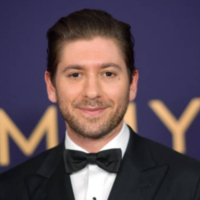 Michael Zegen net worth and salary: Michael Zegen is an American actor who has a net worth of $4 million. Michael Zegen was born in Ridgewood, New Jersey in February 1979. From 2004 to 2011 he starred as Damien Keefe on the television series Rescue Me. Zegen starred as Benny Siegel on the TV series Boardwalk Empire from 2011 to 2014. He began starring as Joel Maisel on the series The Marvelous Mrs. Maisel in 2017. Zegen has also had recurring roles on the TV series How to Make It in America as Andy Sussman in 2011, The Walking Dead as Randall Culver in 2012, Girls as Joe in 2014, and Happyish as Atomic Goldfarb in 2015. Michael Zegen has also appeared in films including The Girl Next Door, Adventureland, Taking Woodstock, Frances Ha, Brooklyn, Becks, Tyrel, The Seagull, and more. He won a Screen Actors Guild Award in 2019 for The Marvelous Mrs. Maisel. Zegen was also nominated for Screen Actors Guild Awards in 2015 for Boardwalk Empire and 2020 for The Marvelous Mrs. Maisel.