Michael Peña Net Worth and Salary: Michael Pena is an American actor who has a net worth of $12 million dollars. Peña is best known for his various roles in major motion pictures, including "Crash," "American Hustle," "Fury," the "Ant-Man" franchise, and countless others. He is also known for his work on a number of television series, including "Cesar Chavez," in which he played the title role. Michael also appeared quite heavily in the Netflix series "Narcos: Mexico." Peña is considered a "character actor."

Early Life: Michael Anthony Peña was born on January 13th of 1976 in Chicago, Illinois. Raised by working-class parents, Peña grew up in a family of Mexican immigrants, and his parents had originally worked as farmers in their home nation. Michael grew up primarily in the North Lawndale area, where he attended high school.

Career: Peña has been pursuing an acting career since 1994. His first roles in independent films came when he was still a teenager. That being said, it would take Michael ten more years until he finally broke through into the mainstream with films like "Million Dollar Baby" in 2004. This film won an Oscar for Best Picture, and it helped put Peña on the map. Also in 2004, Michael starred in the critically-acclaimed film "Crash." It was this second film that truly helped Peña book more substantial roles in major films throughout the next few years.

After "Crash," Michael switched gears and booked a recurring role in the TV series "The Sheild." The series won a Golden Globe, and Peña followed up by appearing in the film "World Trade Center." That year, Michael booked a smaller role in "Babel," continuing his streak of appearing in Oscar-nominated movies. In 2006, Peña moved back to television work once again, appearing in the HBO movie "Walkout."

Next year, Michael joined Mark Wahlberg in the film "Shooter." Two years later, Peña ventured into comedic work with the film "Observe and Report." In 2012, he joined the cast of "End of Watch," playing a central role alongside Jake Gyllenhaal. The film revolved around two LA police officers played by Peña and Gyllenhaal. That year proved to be quite busy for Michael, as he also played the central role in "Cesar Chavez," a film about an American labor leader. In 2014, he joined a star-studded cast alongside Brad Pitt, Shia LaBeouf, Logan Lerman, and Jon Bernthal in the WWII film "Fury."

In 2015, Michael Peña made his first appearance in the Marvel Cinematic Universe, playing the role of Luis in "Ant-Man." He would later reprise this role in the sequel "Ant-Man and the Wasp." Also in 2015, Peña appeared in "The Martian." Over the next few years, he starred in films like "12 Strong," "A Wrinkle in Time," "Collateral Beauty," "CHiPs," and "Fantasy Island." During this period, Peña also joined the cast of "Narcos," which led to his subsequent appearance in "Narcos: Mexico."

Michael is also an experienced voice actor, having booked roles in animated series like "Chozen," "American Dad," and "Turbo." He is probably best known for his voice acting role in "My Little Pony: The Movie," in which he played Grubber.

Relationships: In 2006, Peña married Brie Shaffer. They welcomed their son into the world in 2008.

Scientology: Michael Peña has been a member of the Church of Scientology since the year 2000. In one interview he claimed that Scientology had made him a better actor.

Music: Michael is also passionate about music, and in 2005 he started his own rock band called Nico Vega. However, he left the band two years later to focus on his acting career. He still occasionally writes songs for the band. 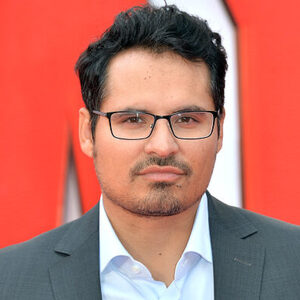