Michael Angarano Net Worth: Michael Angarano is an American actor who has a net worth of $2 million. Born in Brooklyn, New York, in 1987, Michael Angarano made his on-screen debut in 1997's "For Richer or Poorer" as Sammy Yoder. He lost out on the role of Anakin Skywalker for "Star Wars Episode I: The Phantom Menace", and landed his first big role in "Little Secrets" with David Gallagher and Evan Rachel Wood in 2002. He appeared as Elliot in several episodes of "Will & Grace" from 2001 until 2006 before scoring roles in "Seabiscuit", "Maniac Magee", "Summerland", "Sky High", and "Less than Perfect". He had a small role in a handful of episodes of thriller series "24". His other TV and film credits include " The Pretender", "Almost Famous", "The Dust Factory", "Dear Wendy", "Lords of Dogtown", "The Final Season", "Main in the Chair", "The Forbidden Kingdom", "The Art of Getting By", "The English Teacher", "Empire State", and "Drunk History". In 2008, "Vanity Fair" called Angarano one of the up and coming actors in Hollywood with the "new wave" movement. Angarano previously dated "Twilight" star Kristen Stewart before their 2009 breakup. He dated English actress Juno Temple from 2012 to 2016. 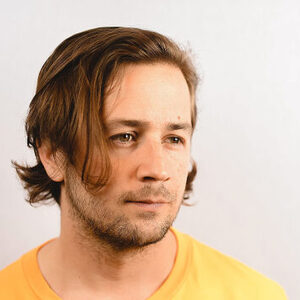