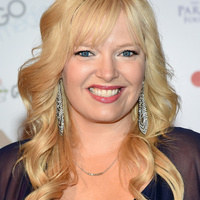 Melissa Peterman net worth: Melissa Peterman is an American actress and comedian who has a net worth of $8 million dollars. Melissa Peterman was born in Minneapolis, Minnesota in July 1971. She graduated from Minnesota State University, Mankato. She performed in a production of Tony n' Tina's Wedding and wrote and performed at an improvisational comedy theater. Her film debut came in the 1996 movie Fargo. She did not appear on screen again until 2000. From 2001 to 2007 Peterman starred in the television series Reba as Barbra Jean Booker Hart. Since then she has been featured in the TV shows Surviving Suburbia, Rita Rocks, Working Class, and Pretty the Series. In 2012 she was cast as Bonnie Wheeler in the ABC Family sitcom Baby Daddy. In 2013 she became the host of the ABC game show Bet On Your Baby and ABC Family's Dancing Fools. Melissa has also appeared in the movies How High and Here Comes the Boom. She married John Brady in 1999 and they have a son together.